Domino spent all last week in England with her boyfuriend Milo.  They attended the London Olympics for certain events, and took some time away for romantic sidetrips.  These are the pictures that were taken of their marvelous adventures (with the help of kind strangers). 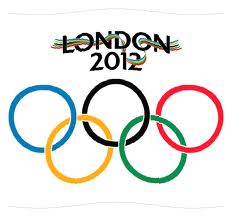 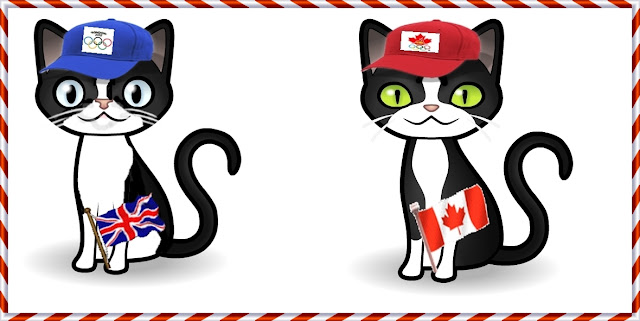 Here are Milo and Domino rooting for their respective country's athletes.  They attended many of the venues but liked the Track and Field events the best. 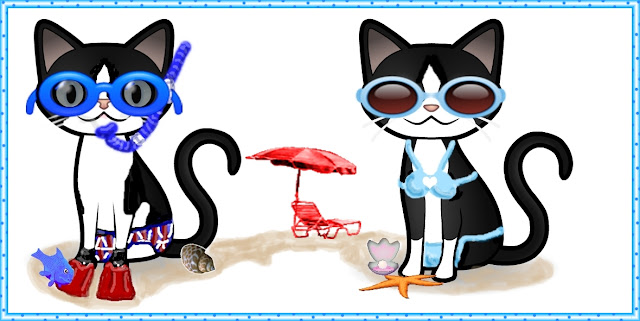 One afternoon they spent at the seaside.  Milo's just mad about snorkelling -- and he even caught a fish -- and found a real pearl inside an oyster for Domino. 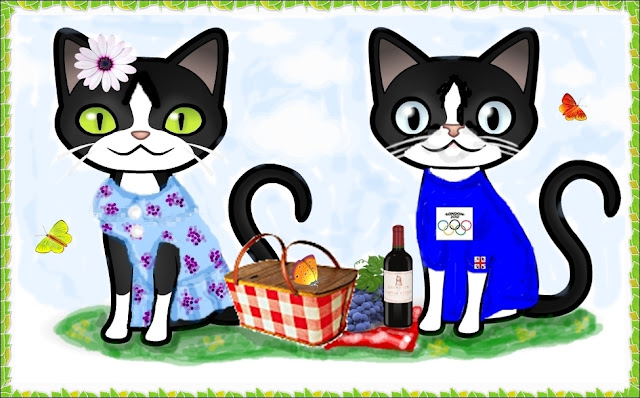 Another afternoon they had a picnic in the country.  Domino is wearing her new dress -- the one she most recently modelled (see last Fashion Friday post).  Don't they look like the happy couple? 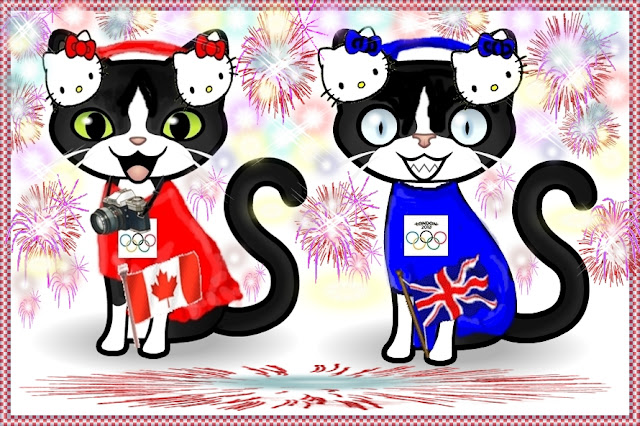 And finally, they attended the Closing Ceremonies.  Milo had presented Domino with a pair of 'Hello Kitty' ear muffs so that the exploding fireworks wouldn't hurt her ears.  Little did he know that Dommy had purchased a pair in blue for him.  Why are you looking so sheepish Milo?  Huh?  (I think Milo would rather say 'Bye Bye Kitty' to his set of muffs.)

Anyway, these two LOVE MUFFins had a marvelous time together at the London Olympics and exploring the English coast and countryside.  It's a time they'll never forget.  How could they with these pictures to remind them?

Awwww....so sweet! Alfie and I had a wonderful time too, and loved seeing you, especially at the trip to the beach. Sigh...such wonderful memories.

How exciting that you got to see all that first paw. Fantastic.

Have a great day.

Oh, how adorable! I'm glad they enjoyed each other's company so much.

What a great review of your trip to the Olympics Domino. We love all your different outfits. Someone in that family is very clever. Take care.

It does look like they had a grand time

I think they both won the gold....hearts!

Aw, they are the cutest couple! We're glad they had a good time!

Oh! That is so sweet!
Kisses
Nellie