Today, Domino is lounging out on the back deck. 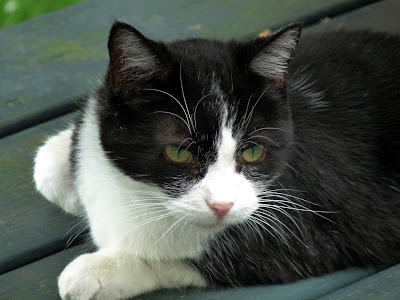 For once, it's a beautiful day and she's really enjoying the furesh air. 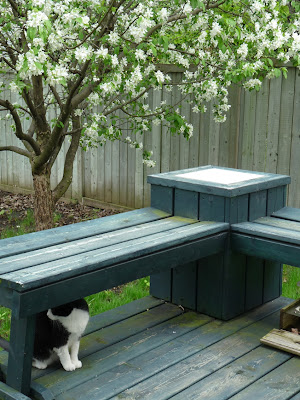 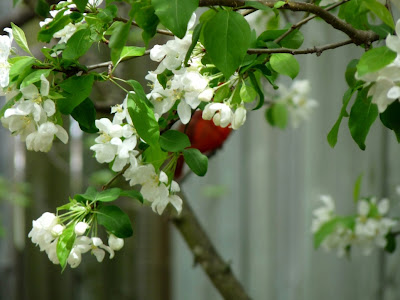 "It's Mr. Cardinal!  We has kinda a formal relashunship, so I calls him 'Mistah'.  Is too bad he wudunt show us his face.  He's hidin' behine da blossoms.  But yoo kin still see his bootifull red coat of fedders!" 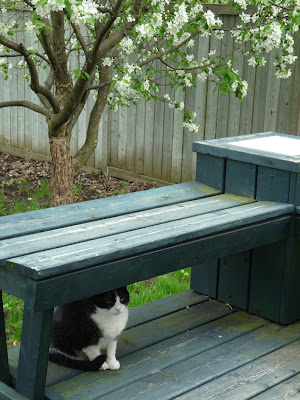 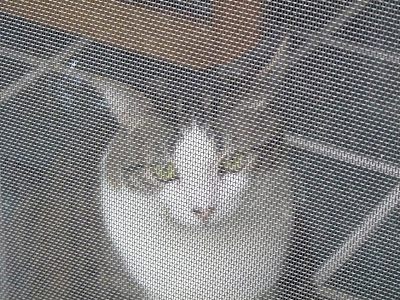 "I calls her 'Missy'.  We duzn't has a verreh good relashunship at all!  She is my niece, but she finks she's mai boss, an' she's only visitin' till Ryan's renovashuns are finished at de end of dis week." 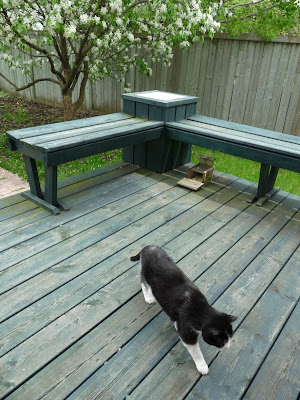 "I'm gonna go and let her noes who's Queen of da Howse!" 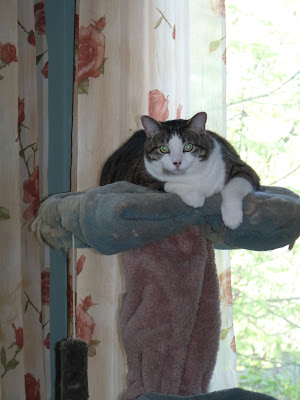 But when Domino goes inside, to her dismay, Missy has taken over the top of the cat tree. 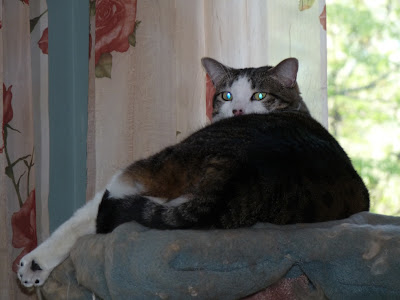 And then she has the nerve to show the "Back of Disrespect"! Being the Queen that she is, and with propurr manners, Domino duzn't hassle her guest, but takes a PURRime spot on the chair, with her loyal bodyguard Dante to back her up. 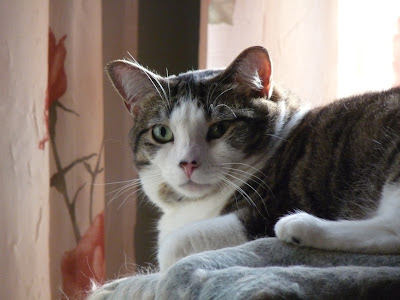 Missy thinks there must be something really good about that chair -- so she wants it! 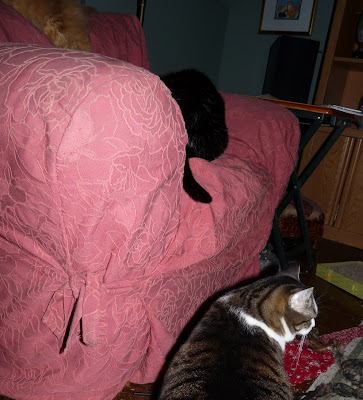 Only to find that Domino has turned her back on her.  A taste of her own medicine sure didn't go down well.
Domino has triumphed again in a peaceful and regal way.  Not at all like Missy who is always sporting for a good fight.  Domino refuses to fight for what is already hers.
On Friday, Missy will go home to her newly renovated digs where she will be Queen of her own House.  She has learned many lessons during her stay with us, of which humility is but one.
Posted by CCL Wendy at Tuesday, May 24, 2011

Does a cat ever learn humility? Ha! We don't think so! :-P

Looks like Missy is an alpha kitty...Domino was very gracious not to squabble over the cat tree!

It is important to let intruders know your territory! Good for you Domino!

Domino is such a nice cat! Me wishes that Kozmo would be going home at the end of the week!
Kisses
Nellie

Domino, we think your niece is very cute! She is probably lonely and missing her Mom and Dad.

Mister Cardinal is a very handsome visitor too!

A true and regal sign of leadership (otherwise known as Queen) is not to squabble! Good show Domino (hey, that rhymed)!!
~Lisa Co9T

That Missy does not sound like a very well-behaved guest! I bet you won't miss her when she goes home, Domino!