Our darling Domino passed away in February, but I couldn't summon the courage to write about it until now.  Her passing has left a big hole in my heart and in my life. 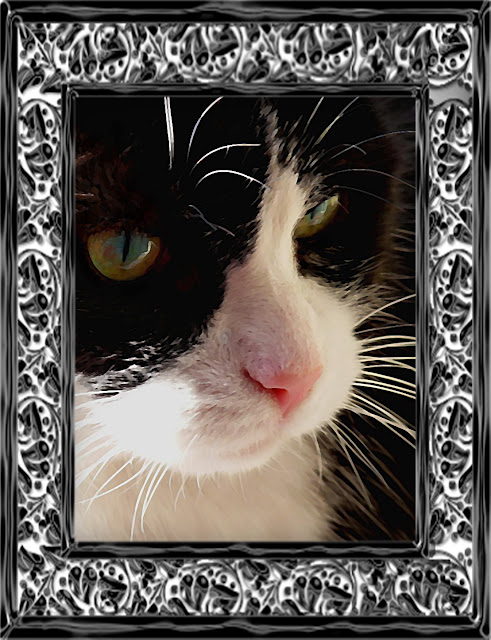 As you can see Domino had the most gorgeous green eyes.  She was a natural beauty and a natural model.  She actually enjoyed getting dressed up and posing as so many of her pictures will illustrate. 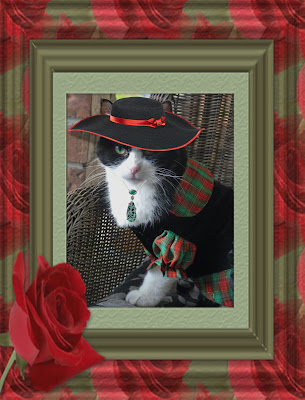 Sometimes I added hats and jewellery digitally but the dress was always real.  As she grew older, I would just add hats and other accessories via computer, because she was not as well as she once was. 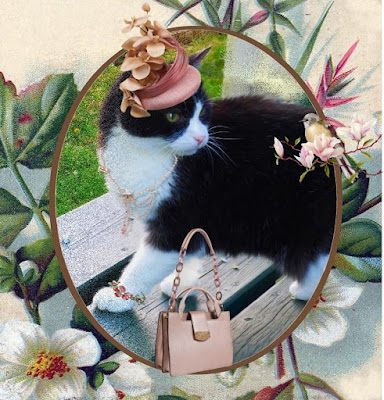 Domino was a small kitty but exceedingly feisty.  She ruled the roost among the 3-Ds, even cowing the gargantuan Dante with a wave of her little paw. 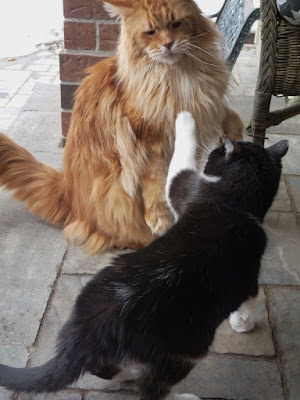 Domino ruled the street, too (literally).  She would sometimes (to my dismay) sit or stand in the middle of the road forcing any cars which wished to pass to slowly steer around her.  Fortunately, nothing untoward ever happened as I was never able to reach her in time to prevent an accident.

She was equally nosy, and would venture into any open door, be it a neighbour's house, a car or van parked in the street.  She spent more than one night inside the house next door (because they had a kitty door for their own cats) while I went crazy calling for her.

Domino even loved visiting the vet because it provided an opportunity to snoop around.  She never went in a carrier, always on a collar and leash.  The vet technicians got a big kick out of her, as she trotted along beside them willingly.  Here's a picture of her being very relaxed as the vet checked her out. 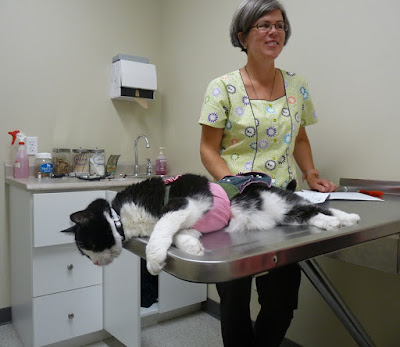 Domino also had a boyfriend named Milo who lived in Devon, England.  They met frequently by the magic of the internet.  He would visit here, and she there.  On special occasions, they always posed for pictures together. 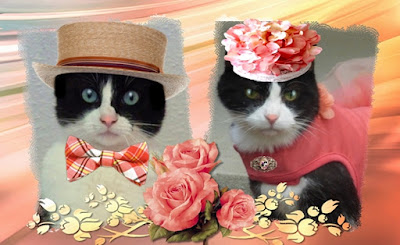 As you can see they were just 'made' for each other.  What a stunning couple!  They were mutually devoted for approximately eight years; Domino was the cougar in this pair.

About four years ago, Domino started to lose weight and we took her to the vet for tests.  It turns out she had hyperthyroidism, which was highly treatable, but over time still had devastating effects. Though she initially put back on a little weight, she was always quite thin after that.  She went from an almost 7 lb. cat to a less than 5 lb. cat.

However, she did well on the medication until more recently when her thyroid tumour grew and she starting losing weight and throwing up all the time.  The vet increased her prescription dosage, but she was never quite the same.  About a week before she passed, Domino had a stroke and never quite recovered.  She left quietly in her sleep one night.

Domino was a remarkable kitty, and as a tribute to her I want to continue to post some of her most amazing pictures, similar to the ones I have included here.  She was one-of-a-kind.

Sadly, Domino never got to meet her new sister who was born on January 28, 2017.  Her name is Dani and she is now safely at home with us.  She is a baby Maine Coon.  I will be starting a new blog for Dani and Dylan and discontinuing this one once I have posted all of Domino's tribute pictures (which may take some time).

I'm so, so sorry for your loss, and my human is heartbroken too. Domino was special to me, because we are a lot alike, as far as wearing clothes and being social. I bet she would have made an awesome therapy cat, if she had wanted to! I'm sending lots of purrs your way. <3

Oh Wendy, we are so sorry to hear about Domino. Just know she was so well loved while she was with you and had a great life. We will miss her just as we know you are missing here something horrible.
BUT,we can't wait to meet Dani.
We sure send you good thoughts Wendy.

My FABulous gal pal Domino; I will miss you terribly. Your sense of fashion knew no bounds; you always looked magnificent in every ensemble and I envied your fashion sense ~~ and I dont think you ever wore a bad color with your coat. I do so hope your mom keeps this blog up and running; rather as a memorial tribute; much like she has for dante. I pray; no I KNOW.....St Francis led you into the heavens and I know once you saw Dante you weren't afraid...please visit your mom to let her know you are alright, if you haven't already. both tuna and I send our most heartfelt sympathies to you mom, dad, dylan and sister dani..... with love always ~~~~~~~ hugs girl =^..*= daisy

Dear Wendy ~ I had heard of your loss of Domino on Facebook, but wanted at the time to respect your wishes not to be on overload with comments ... I remember her well, as I remember all the marvelous "D's". Such a beauty she was, and always will be ... very much missed, this special girl. I know a piece of your heart went with her. May she forever run free, beyond the rainbow, joining the other D's and resting in meadows of sun. Fondly, Ann

Sorry I'm late getting here. I am so, so sorry to hear about your beautiful Domino and I can't imagine what you've been going through. She always delighted us with her beauty, grace and style. Hugs and lots of love to you from all of us.

We are so sorry to hear about Domino. Sending you lots of comforting purrs. We can't wait to meet Dani.

Alasandra, The Cats and Dogs said...

We are so sorry for your loss. Domino was a very fashionable and feisty lady, we are glad you are going to continue to share pictures of her for awhile.

Purrs of comfort and paws of sympathy.

I always stopped by to look at your amazing photos of the three D's and I especially loved Domino. I have such an affinity for tuxedos as my own beloved Angel is a tuxie too. I fully understand the deep sadness in your heart and the huge hole I still feel it with my Abby. Blessings to you.

I am so sorry for your loss. Domino was a beautiful girl.

I didn't know. I am so sorry for the passing of your beautiful girl, Wendy.