DYLAN: A CLOSE ENCOUNTER OF THE SQUIRRELY KIND!

Dylan's in the mood for hunting.  And not just any kind of hunting -- he wants SQUIRREL!!!  And nothing else but SQUIRREL!!! 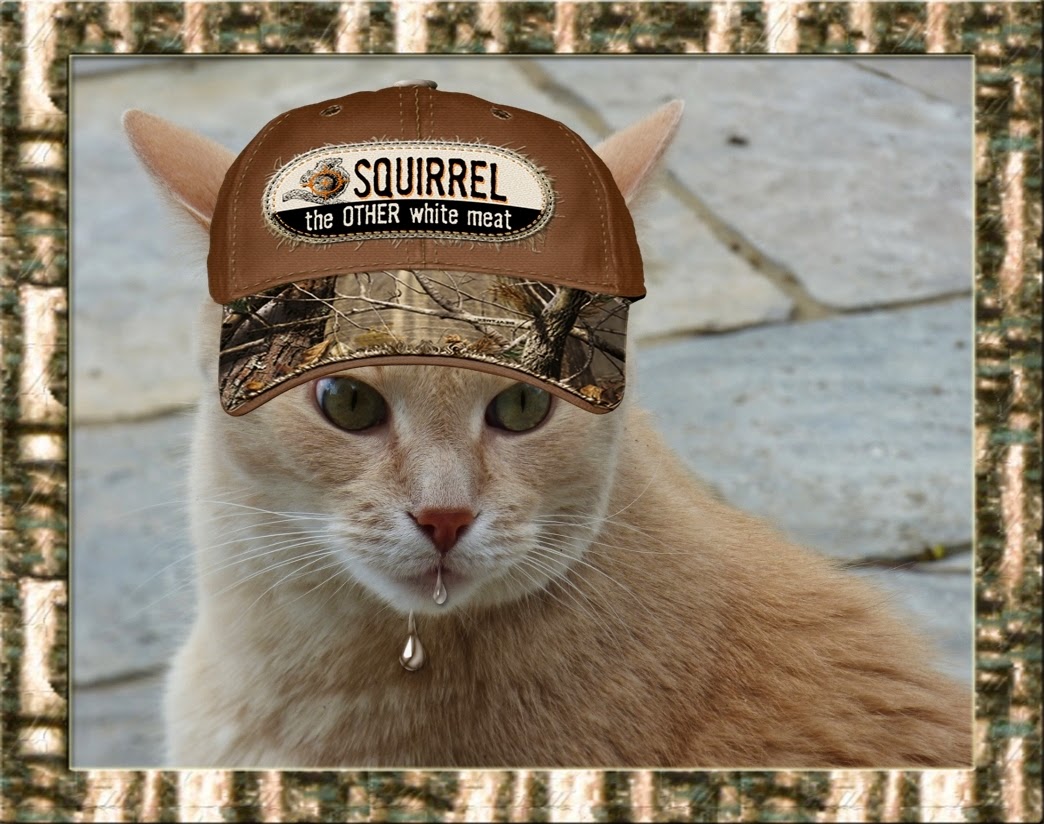 "Now dat it's BBQ seesun, I needs me sum joosy skwirrel kebobs!  It makes me drool jus' finkin' about it." 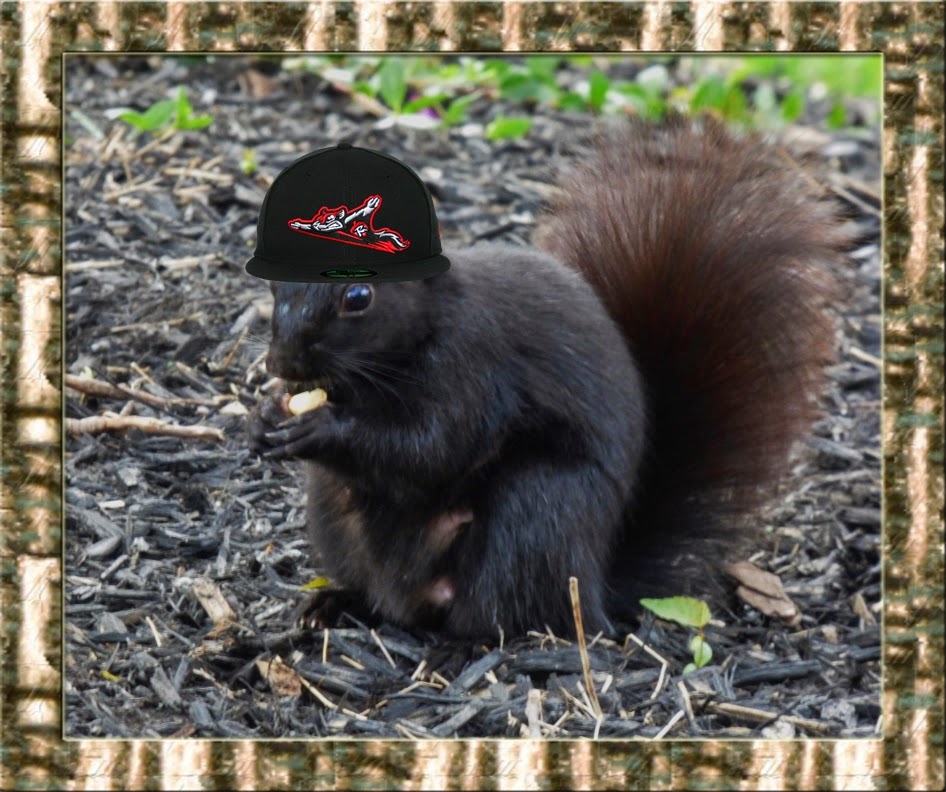 This is Dylan's adFURsary -- and, from the look of his hat, it doesn't appear like he's going to go down without a fight.  "I belongs to a race of SuPURR Squirrels", says the Dark One.  An' we are all highly trained in anti-pussycat warfare." 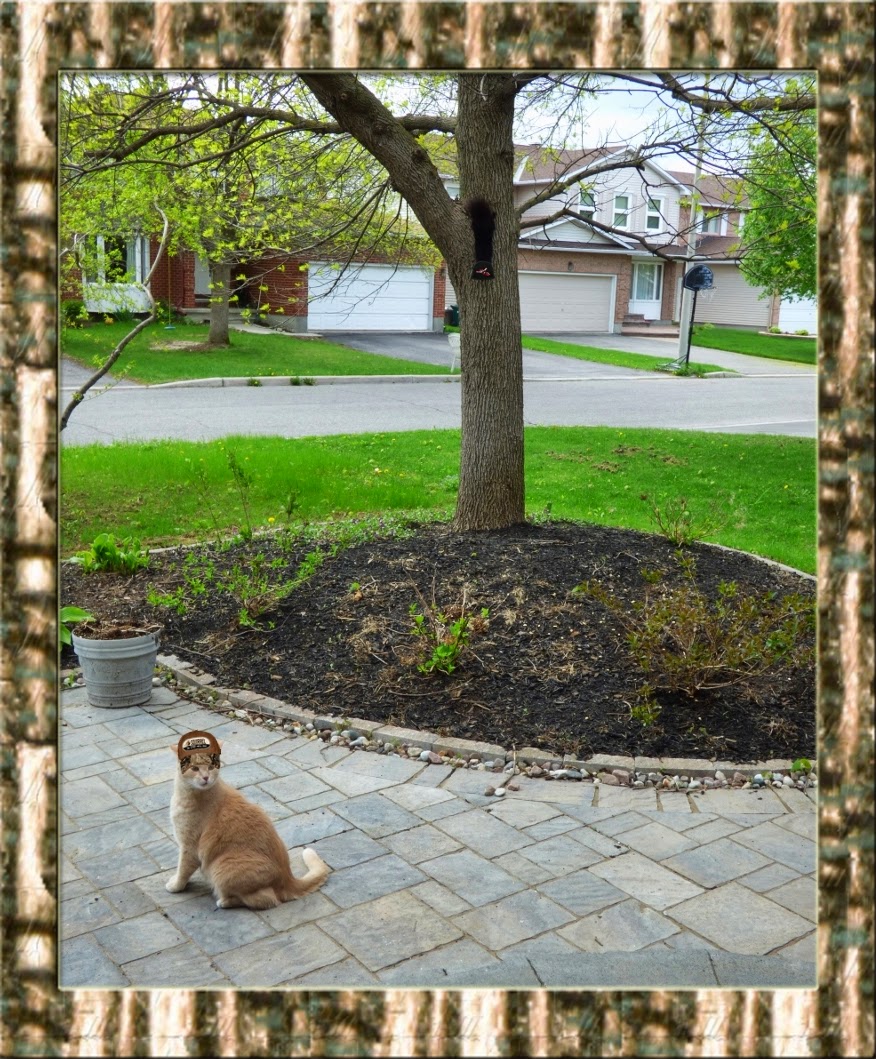 As Dylan leisurely looks around for his quarry, the Dark One sneaks up on him stealthily (as his training has taught him). 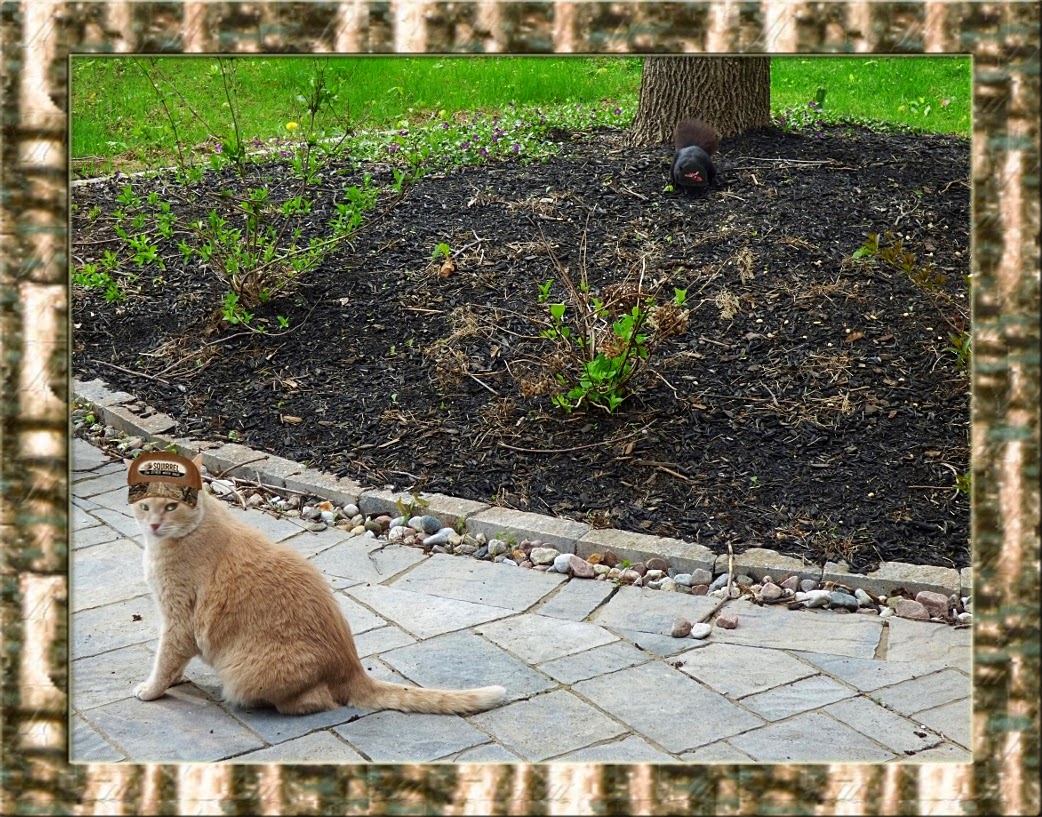 Then suddenly as his ears sound an alert, Dylan hears a rustling sound behind him. 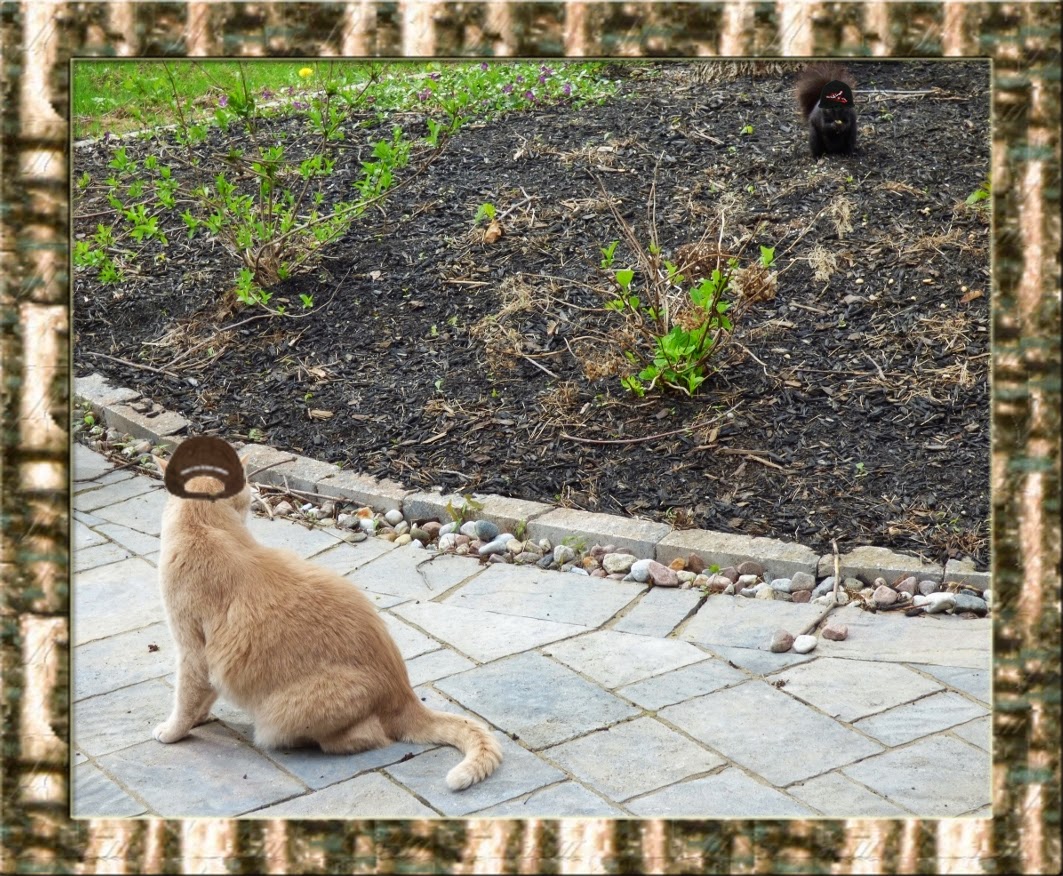 "It is I, yoor foe", declares the Dark One.  "I'm claimin' dis proPURRty fur all squirrels efurrywhere!" 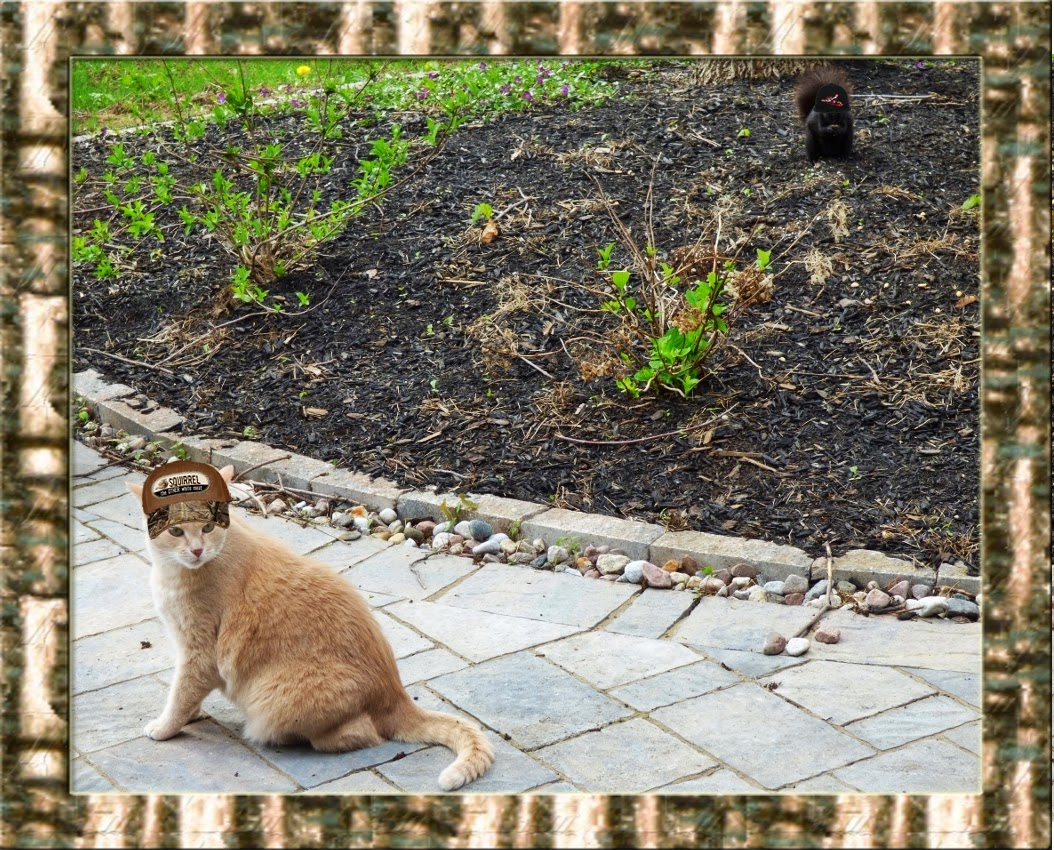 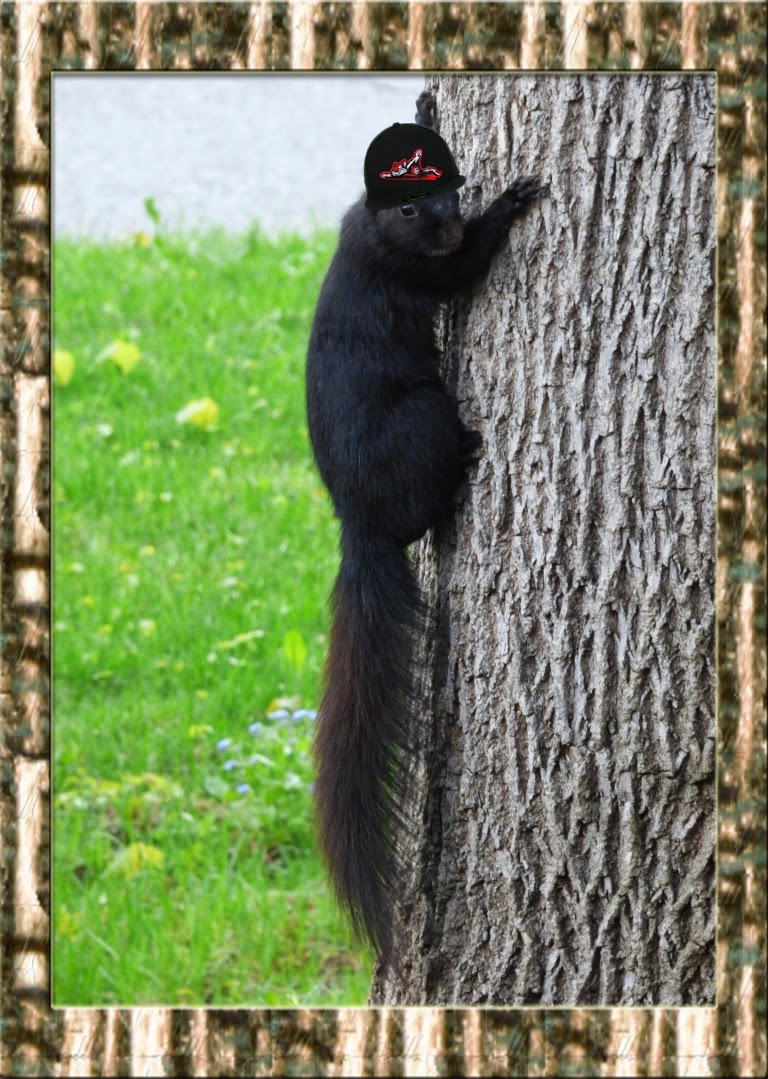 "I noes yoor a fraidy cat, but jus' in case yoo even fink of makin' a  wrong move, I hassa surprise fur yoo up in my tree fort." 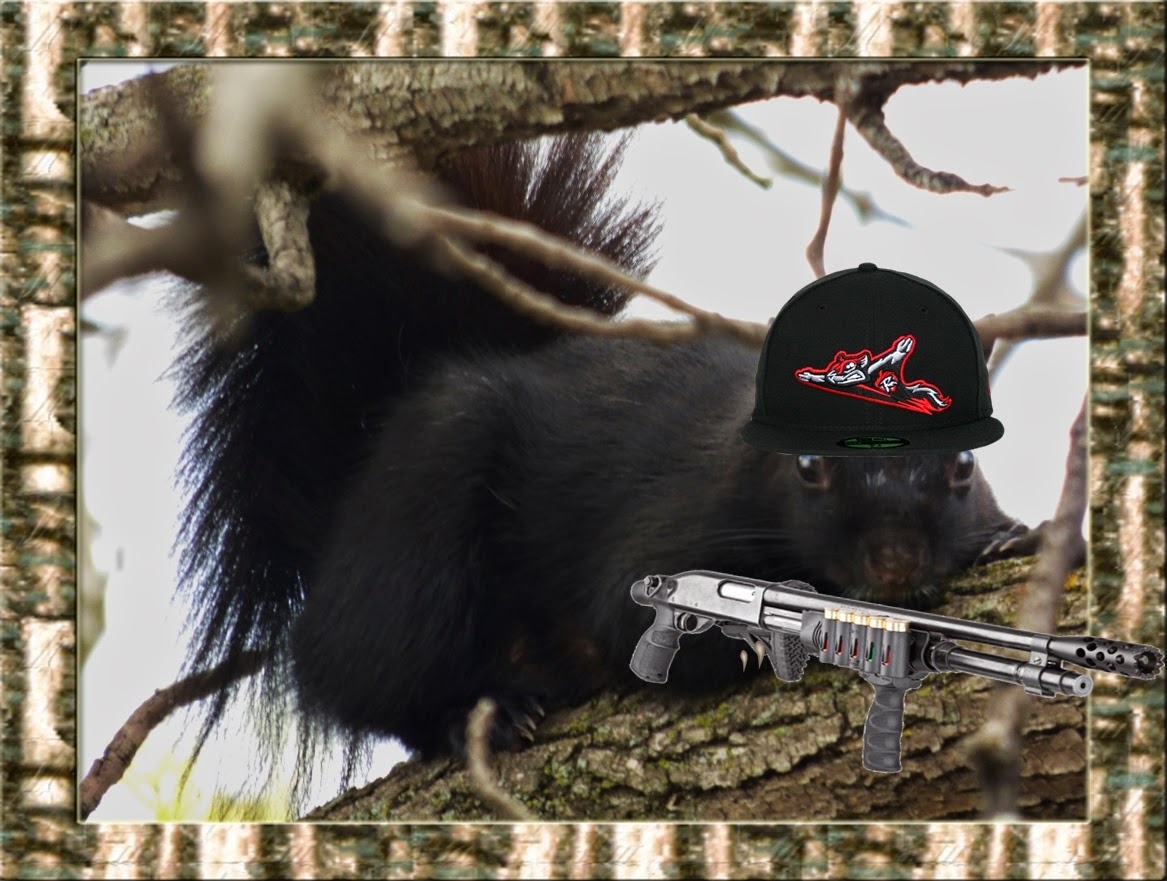 The Dark One has a machine gun at the ready ...  AND he has called in reinfurcements! 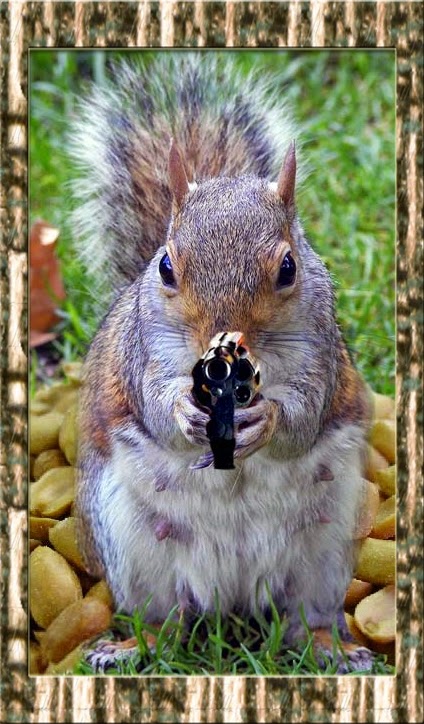 "I kin shoot yoo point blank!" says the little Red One with the revolver. 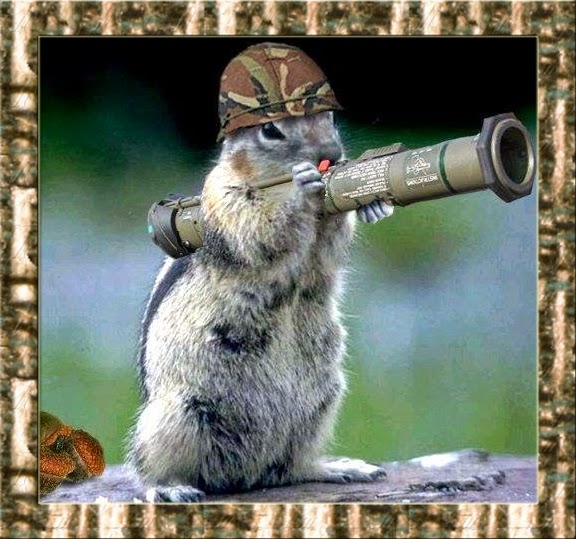 "I kin blow yoo to smithereens!", says the medium-sized Gray One one with the missile launcher. 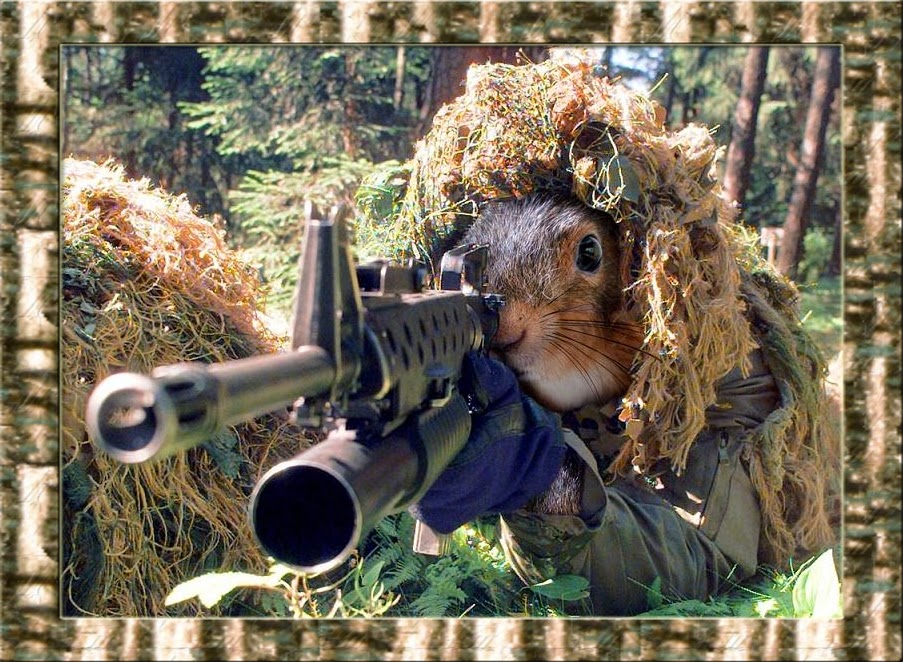 "An' I kin fill yoo wif holes in 30 seconds flat!", threatens the large Brown One covered in camouflage. 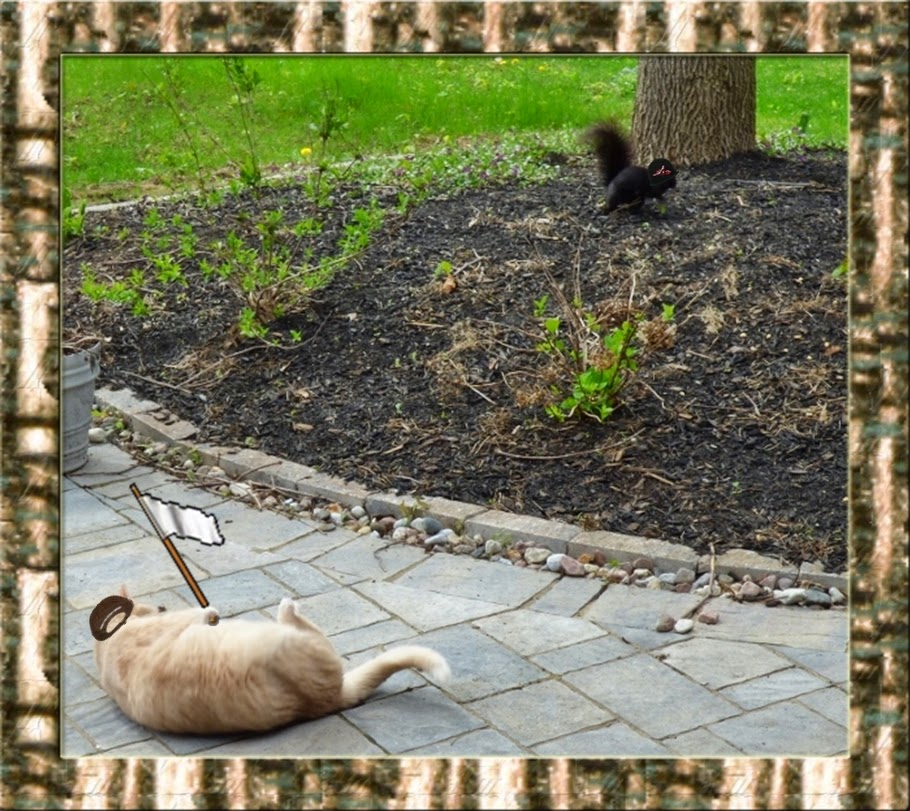 Fearful for his life, Dylan is quick to roll over into a submissive PAWSition and wave his white flag.  The Dark One is thrilled with his easy victory! 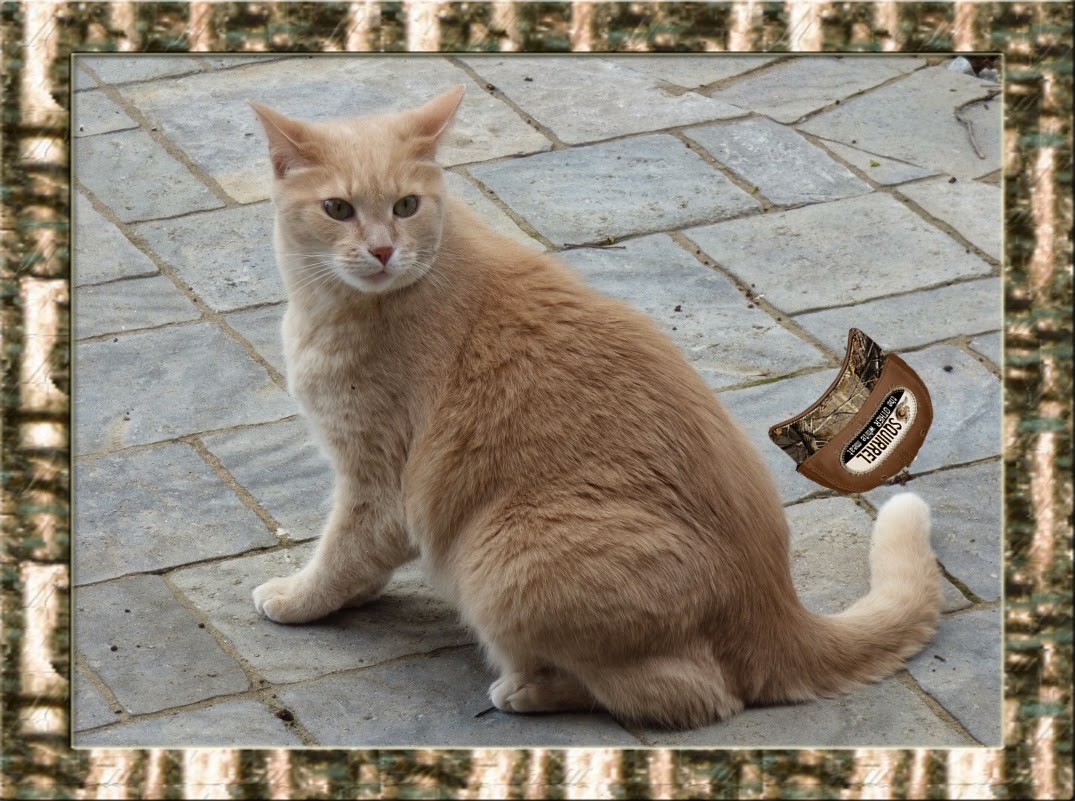 As Dylan gets to his feet in order to retreat as quickly as possible, he doesn't even notice that his hat has fallen off. 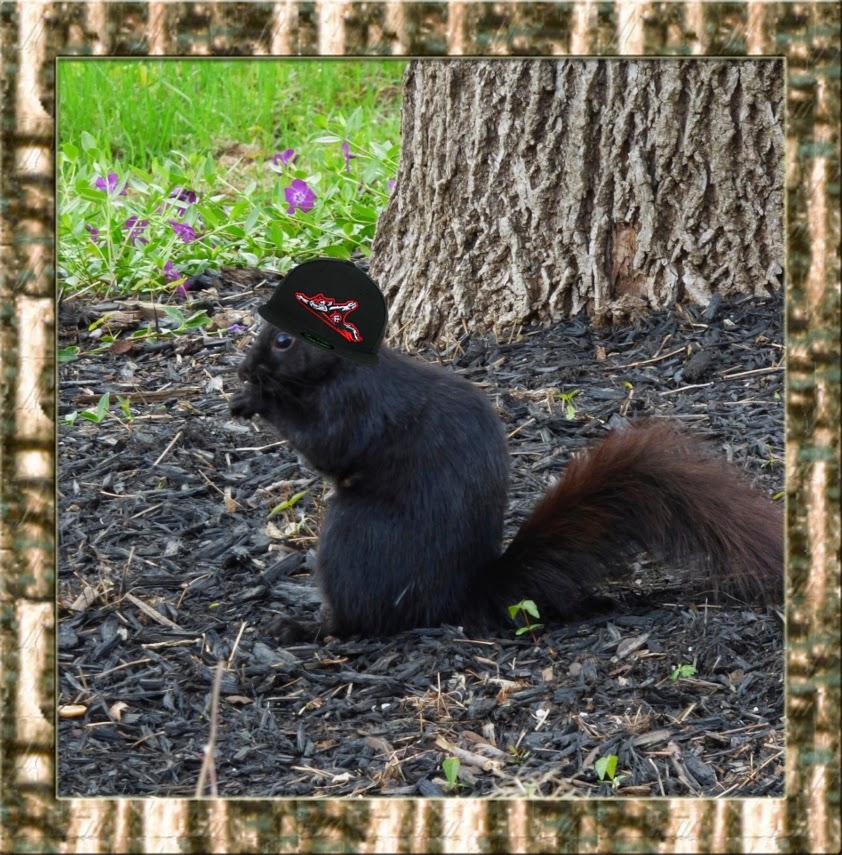 "We taught dat 'mighty' huntah a lesson and didn't even hafta fire a shot!  Now let's has sum lunch." 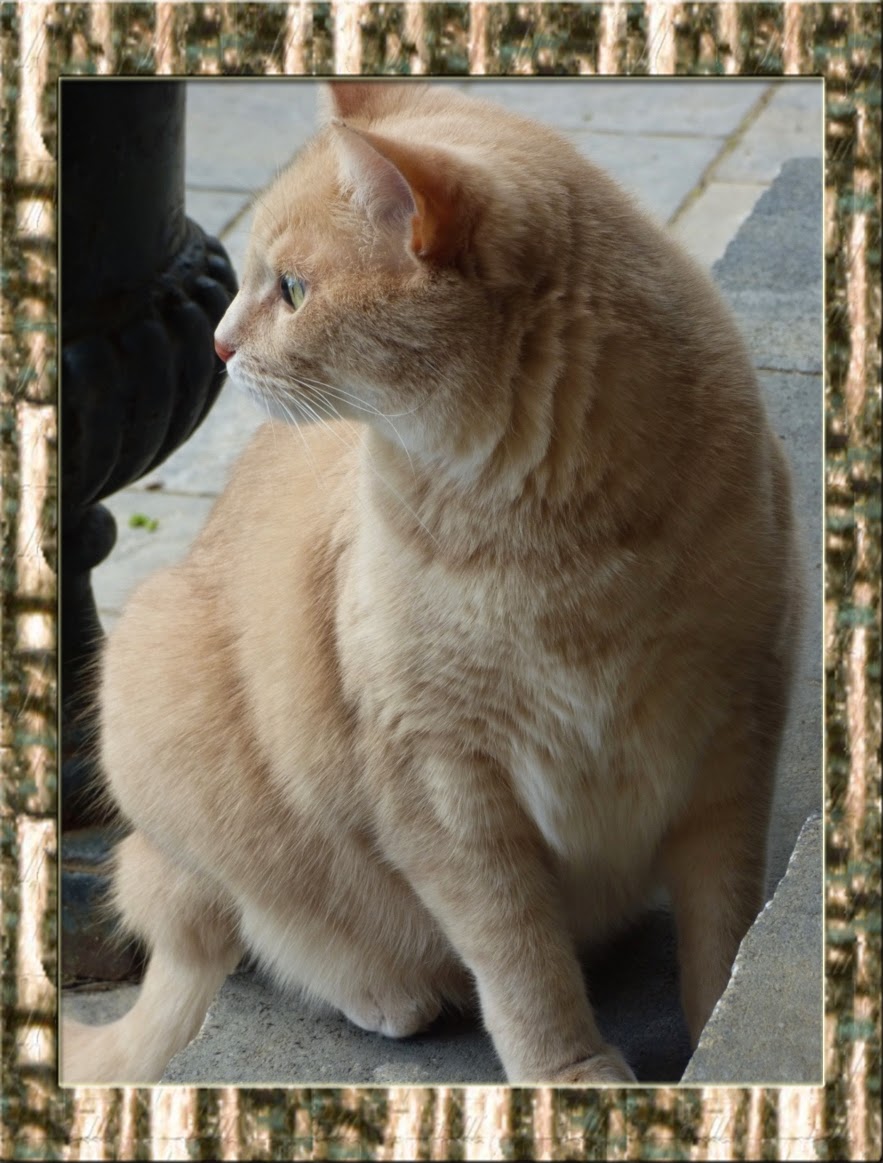 Dylan looks back at what was once his front yard.  It seems that now it's the exclusive territory of the alien wildlife known as the Squirrely Kind.  "Dose squirrels is jus' goin' NUTS!!!" says he. 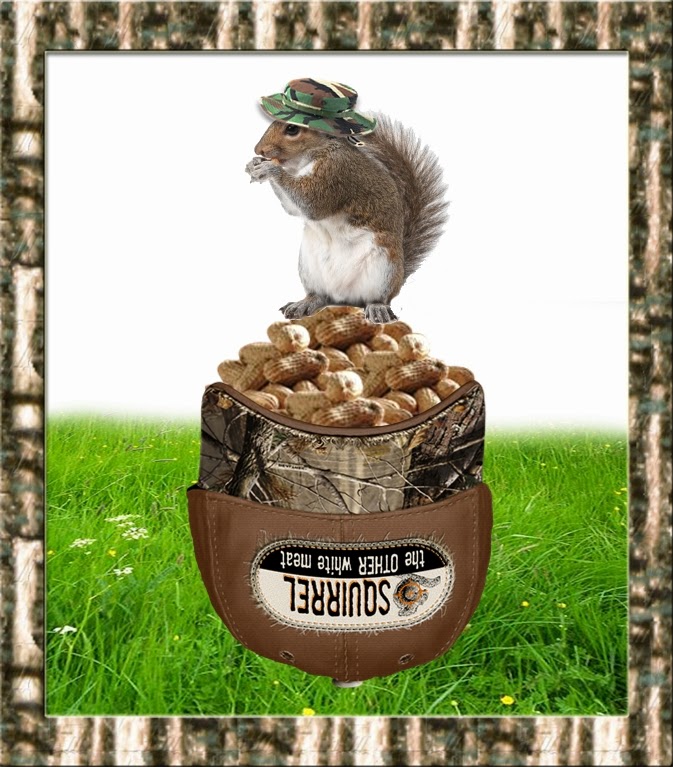 In the end, Dylan has to give them a 'hats off" because of their quick and decisive victory.
Standing atop his newly claimed bounty, the Gray One says "We likes white meats, too, as long as dey is NUT MEATS!"

"Come an' get it efurrywun!"