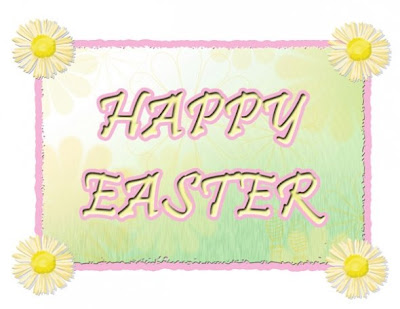 On this joyous occasion, we have 3-D Easter images of Dante, Dylan and Domino (what else?).  They are all dressed up in their best bows, hats and jewels. 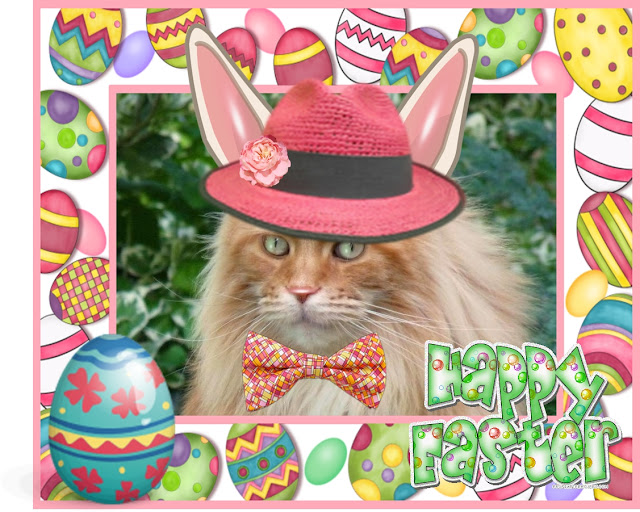 The first "D" is Dante Bunny.  He grows ears efurry year just for Easter, and they just as quickly disappear when it's over.  Being a 'real mancat' aka 'real manBUN', he isn't afraid to wear pink.  Pink PURRks him up!
Dante Bunny says "May yoor Eastah be aBUNdant -- dere's nuffin like a BUNcha BUNS fur Eastah', speshully if dey're nice an' FURm like mine!" 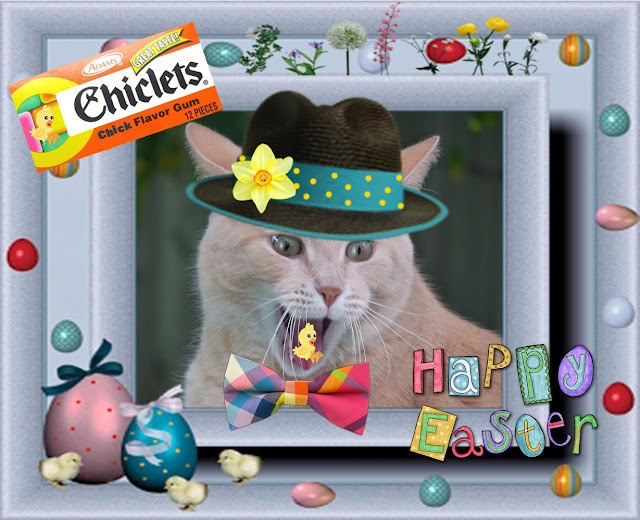 The second "D" is Dylan "The Chick Magnet".  He certainly has attracted the chicks this Easter!  He has discovered that they're nice and chewy, as well as very yummy, so he's decided to come out with a new kind of chick-flavored 'Chiclets'.  By this time next year he may well be a 'Chiclet Magnate', too!  "It all depens on da adFURtisin'", says Dylan "so keeps yoor paws crossed an' yoor eyes open." 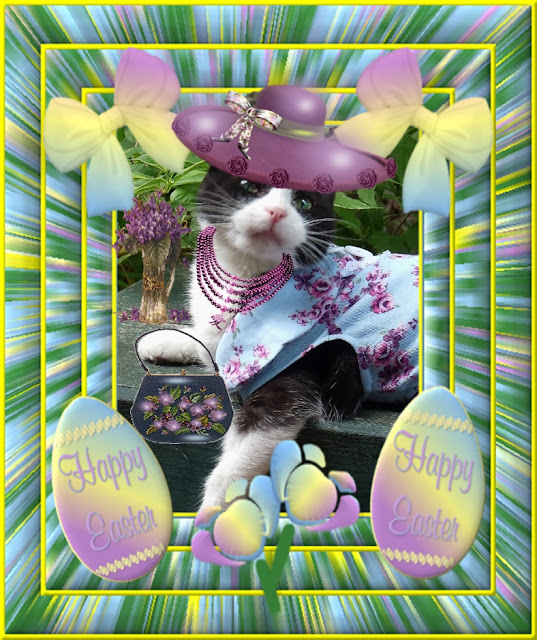 The third "D" is Domino "The Fashionista".  Never to be outdone, Domino is sporting a mauve Easter bonnet embellished with roses and a green and pink ribbon.  Her green eyes stand out most of all, though, and there's no embellishment required, there, at all.  Domino's natural beauty shines through no matter what she does or doesn't wear.

Domino has accessorized her Easter frock with colour-coordinated beads and a purse which complements the ensemble.  "My PURRse is yoosfull fur hidin' eggs, too", she says "jus' in case I wanna egg sumwun on!"
What a little minx!

Later on Easter Sunday, the 3-Ds all changed outfits to coordinate with each of their significant others. 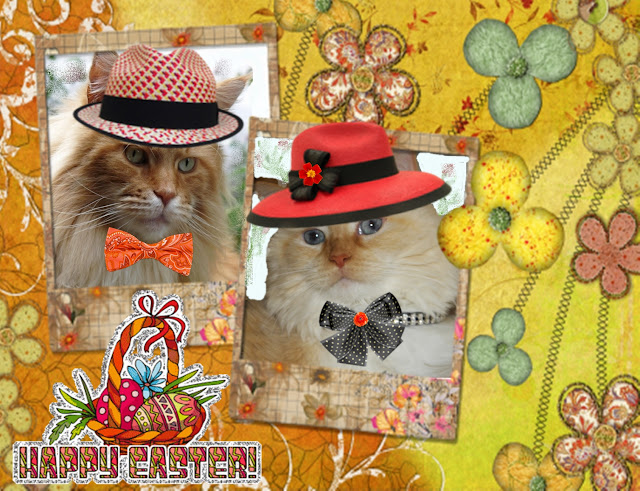 Dante was off to South Carolina to see his fiance, Sascha of "Brian's Home".  He and Sascha both heated things up by dressing in hues of red and orange.  They're already hot enough for each other as it is!  Boy, the temPURRatures must really be climbing in the State of SC right about now! 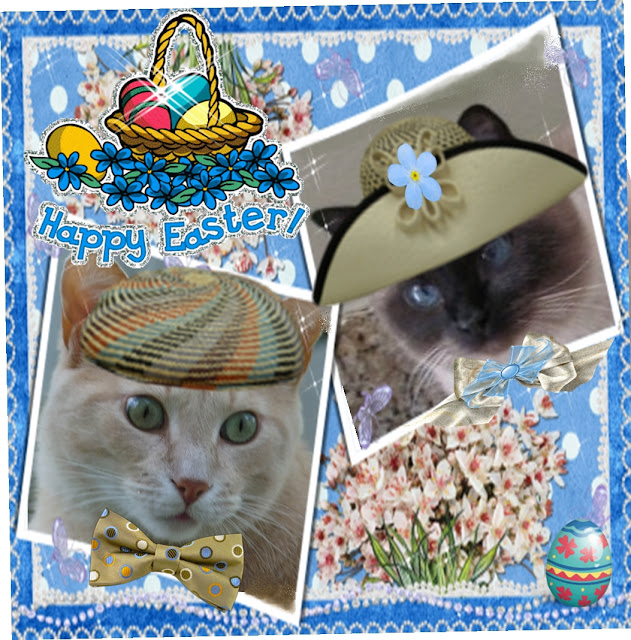 On the other paw, Dylan is in Louisiana with his fiance, Halle, and they're both singing the blues!  Not because they're unhappy, mind you -- because they just love that kind of MEWSic.  It's so inspirational!
And you'll notice that they didn't put ALL of their eggs in one basket -- they're so much smarter than that!  They're very smart dressers, too, now that I think of it. 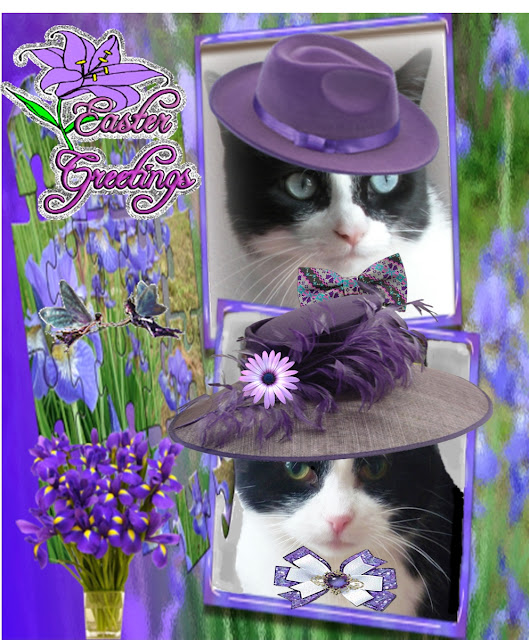 Domino boogied over the pond to Devon, England to stand beside her honey, Milo, for Easter.  PURRpull is the name of the game as far as these two are concerned.

Milo is quite the stylish SUITor in his native tux and rakish fedora, while Domino is very PURRim and proPURR in her PURRpull Easter bonnet.  They have both 'bowed' to tradition; Milo with a captivating bowtie at his neck, and Domino with a fetching amethyst-coloured bow at hers.

So from the 3-Ds, their mates and me, here's wishing all of you a Joyous and aBUNdant Easter!  You can never have too many carrots (or karats, for that matter).

Happy Easter. THank you for the Easter graphic.

We are having a blast together!...We just wanted to check in and let you guys know we were thinking of you!...Happy Easter=we love you all...Halle and Dylan

Those are such wonderful graphics!

Everyone looks wonderful and I know Sister Sascha had the best time ever! Happy Hoppy Easter everyone!

Domino, we are glad you are feeling better=^Y^=