The 3-Ds had the first of their Christmas parties this season on Saturday.  It was a Christmas Dessert party for some of Mama's lady friends.  But, of course, the kitties were intricately involved, as they are with any affair going on in their house. 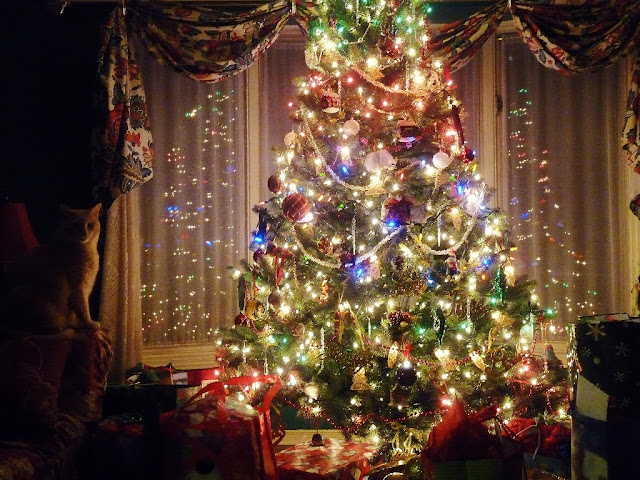 Dylan checked everything out before people arrived.  He generally likes to keep a low PURRofile, but makes an appearance later. 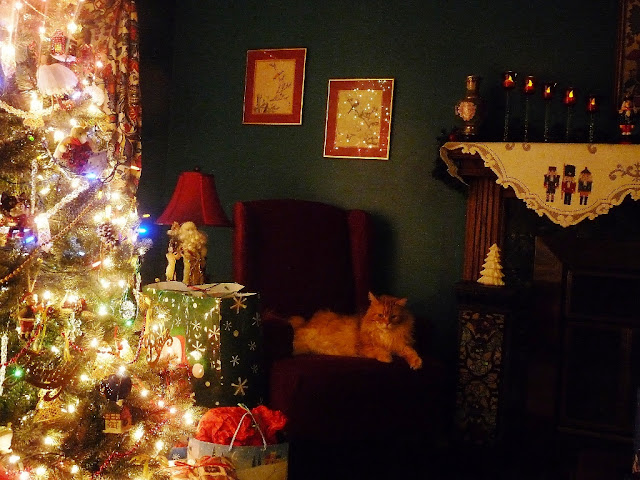 Dante made sure it was all good from his PURRspective! 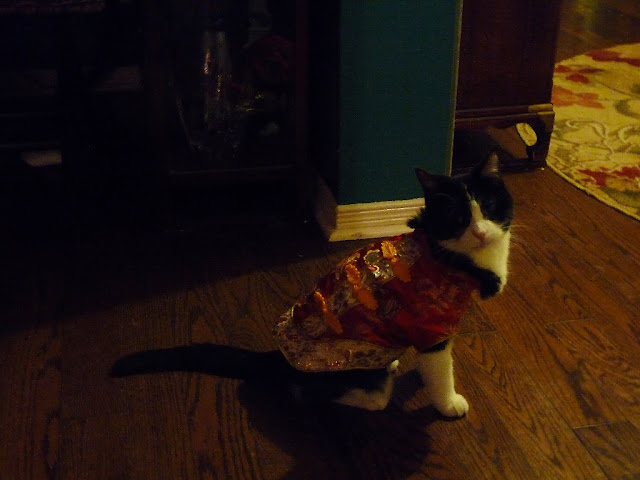 And Domino readied herself to greet the guests. 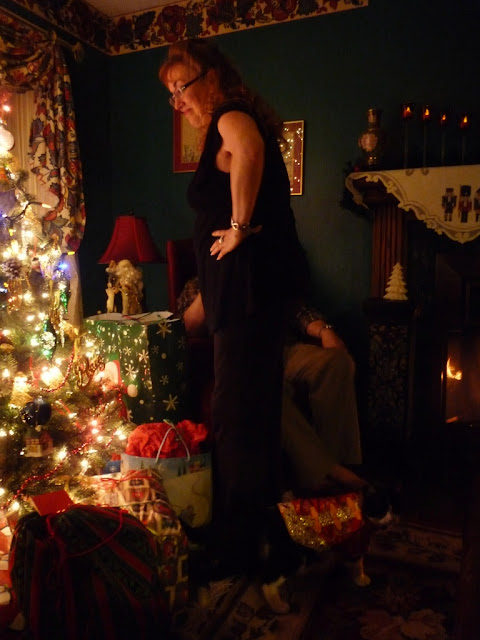 First to arrive was Auntie Susan, but then she just lives across the street. 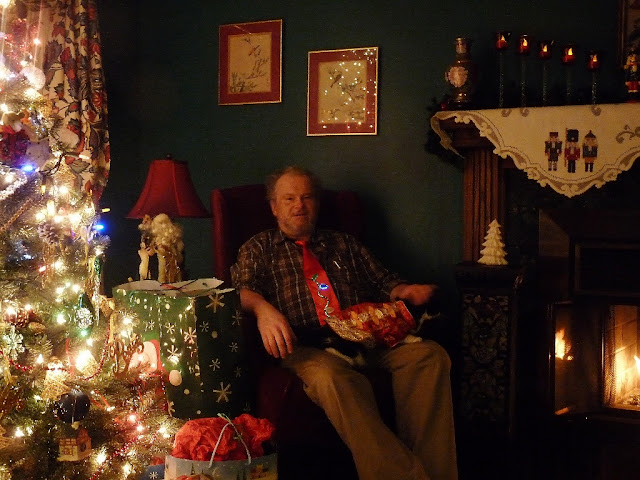 After Susan was seated, Domino took a lap of her own on top of Daddy.  Notice Daddy has a light-up tie, that even flashes off and on in four different patterns!  Daddy's a real good sport. 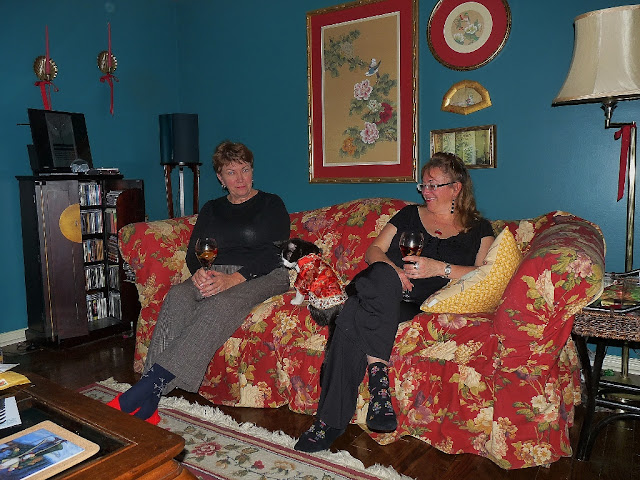 Then Auntie Renate arrived, and Domino showed her to her seat.  Such a good hostess! 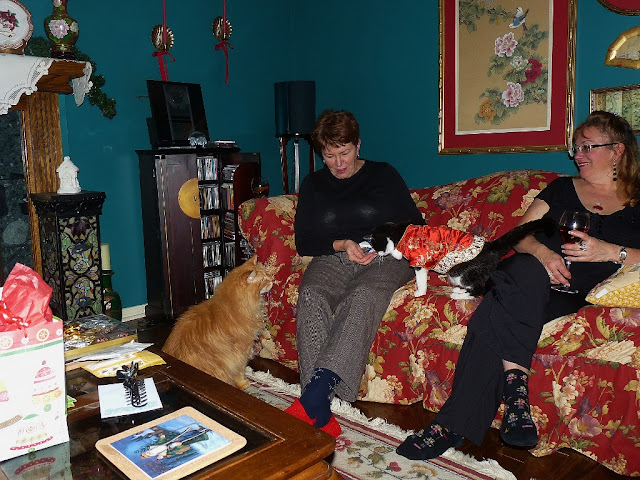 It wasn't long before Dante got into the act, too, because he could hear the treat bag open.  They don't get treats on a regular basis anymore, so this was really special! 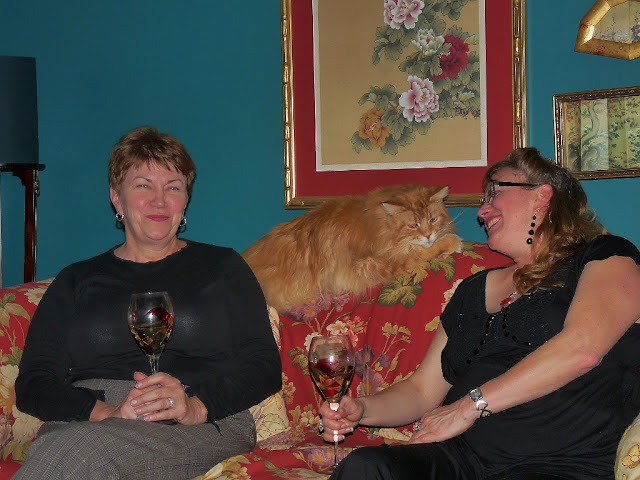 Dante thought cozying up to the guests might get him a few more!  Treats that is, not greets.  But greets is what he got this time. 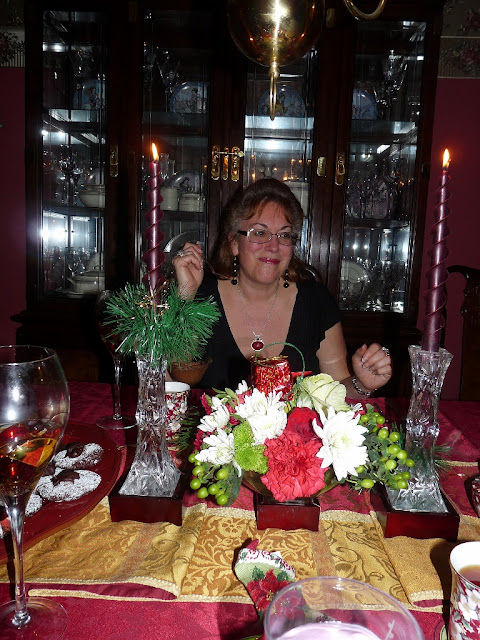 Then we went into the dining room where we had tea and desserts.  Susan seems to be enjoying hers! 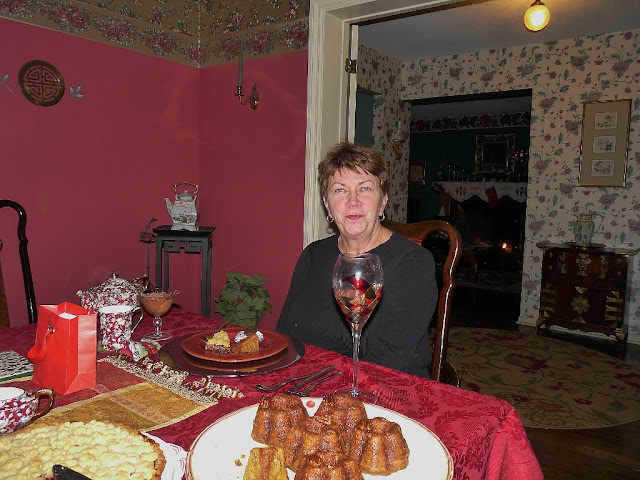 And so is Renate, who has taken a sample of each one.  She has an authentic French chocolate mousse which is flavoured with orange, one of the cookies, a slice of the cake and a sliver of the tart. 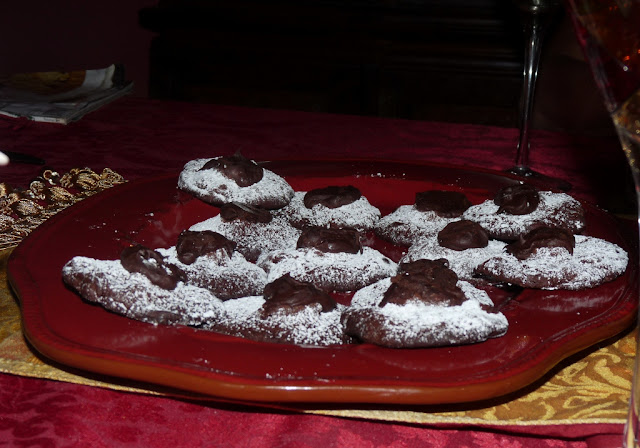 These are the 'Chocolate Cherry Chews', which are chocolate cookies with chocolate chips.  The cookie itself is flavoured with cherry juice, and there's a cherry buried in each one.  The cookie is also sprinkled with icing sugar, and then iced with a dollop of chocolate icing. 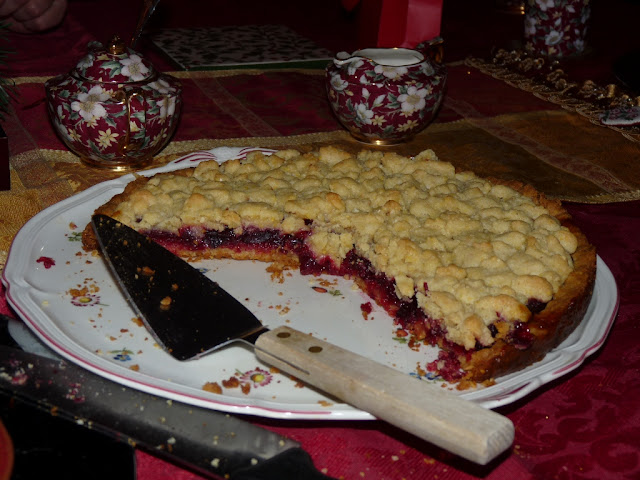 This is the 'Cranberry Almond Shortbread Tart" which is yummy and very tart indeed! 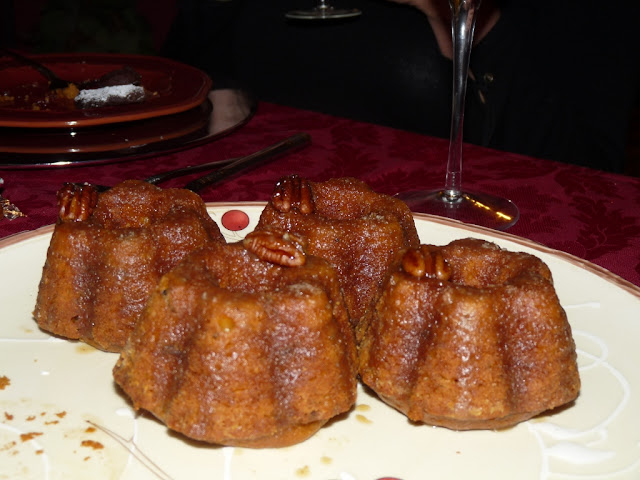 These are the mini-bundt cakes.  They are 'Pumpkin Pecan with a Caramel Glaze" and decorated with a candied whole pecan.  Spicy and moist! 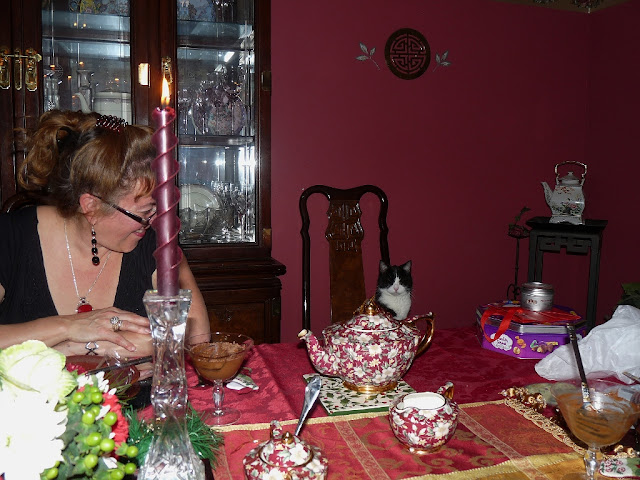 At one point Domino decided she would rejoin the party, and indulged in a little milk on the side. As for the desserts, Susan liked the cranberry tart the best. 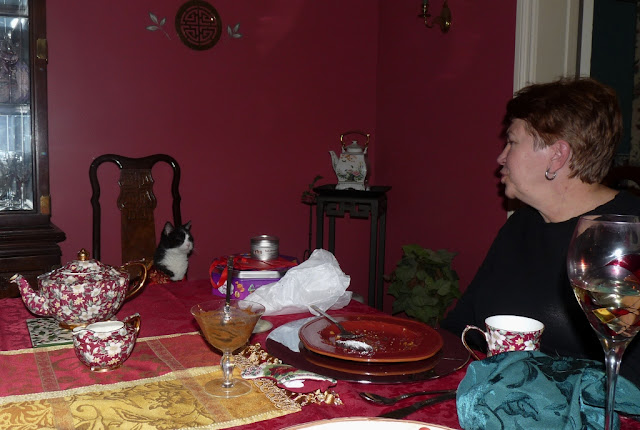 Renate loved the chocolate mousse most of all ... 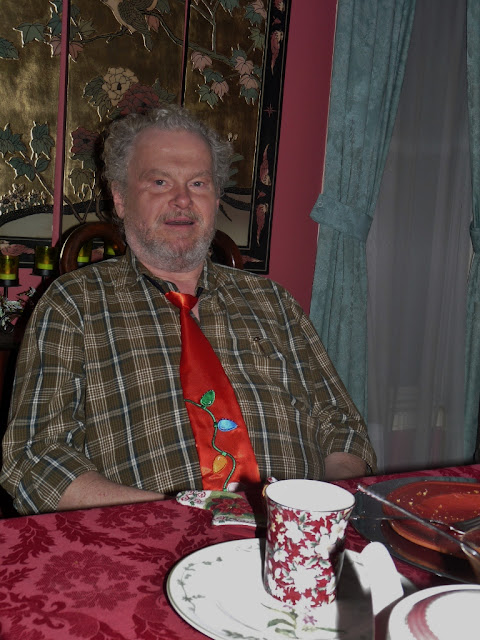 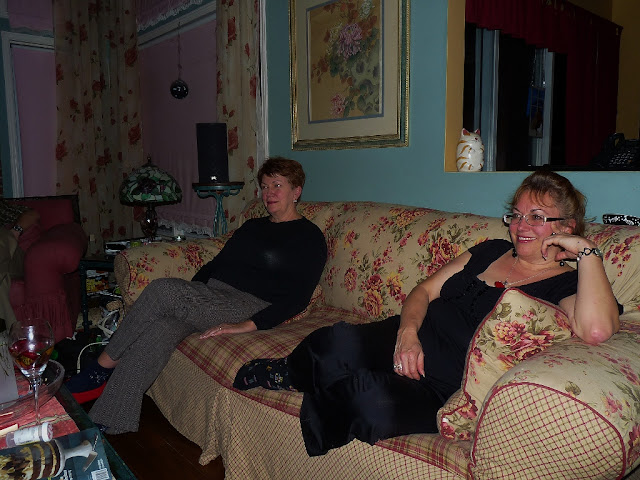 After dessert, we settled into the family room to watch episodes of "Miranda".  Miranda Hart is a British actress/comedienne who has her own series.  We watched three half-hour shows, including her Christmas episode.  What a hoot!  I highly recommend it. 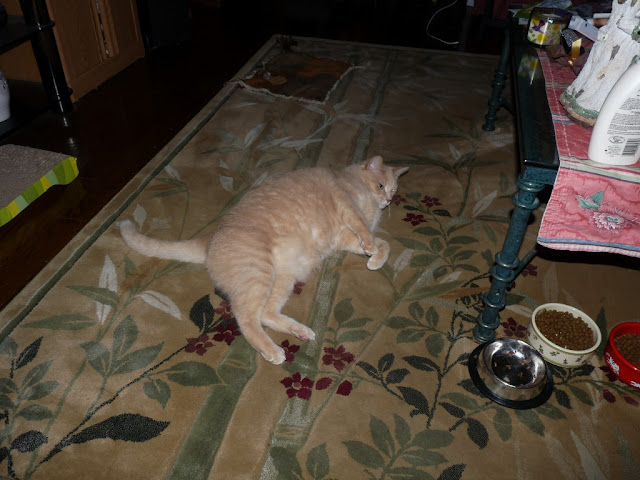 As promised, here's Dylan again.  He likes to get drive-by pattings from all the guests when we're in the family room. 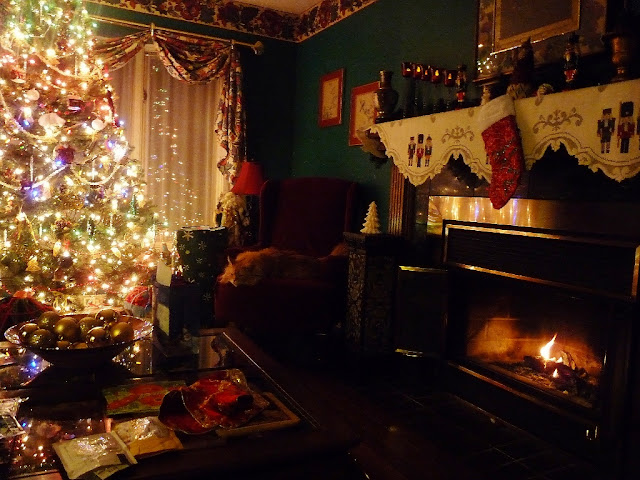 And then it was over.  The guests went home, the fire was dying down, and Domino had taken off her hostess gown. 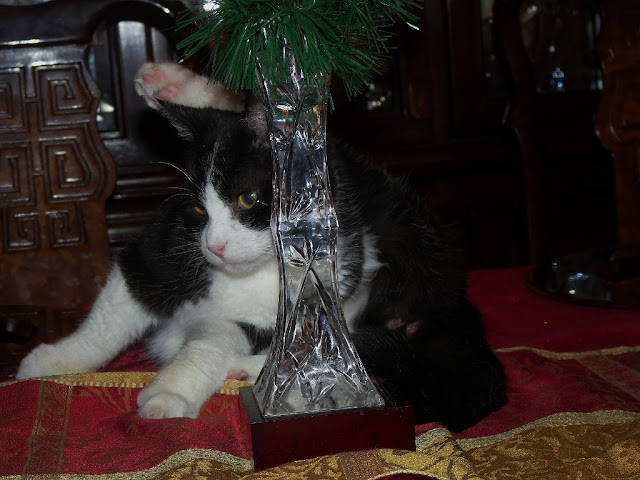 Everyone had such a good time, but it makes me wonder if they would have enjoyed it quite so much if they had seen what took place on the dining table just hours before.  Domino was taking a bath.  At the very least you have to say she's got style!

My human is hungry now and she wants all the recipes for those treats! I have NO idea why, since none of them have chicken in them! It looks like everyone, kitty and human, had a lovely time.

Merry Christmas! You cats sure know how to party! Love seeing how you enjoy your guests.

what wonderful and GORGEOUS photos! Plus, your sweets are making my mouth water!
Your dining room is the same color as my office, love it!
have a magical Christmas!

What a fabulous pawty!

A very Happy Holiday from all of us at ManxMnews

How fun that you all got to join the party! We hope you didn't over celebrate! Merry Christmas to all of you!!

What a wonderful party and gorgeous decorations!...Wishing you all the best Merry Christmas ever!!...love and hugs...J, Calle, Halle, Sukki, Mommy Cat, Daddy Cat

Dylan, you are so handsome=I never get tired of looking at your photos!...Merry Christmas darling, I love you...xoxoxoxoxoxoxo...Halle

Such wonderful treats (yous guys not the people food) and your tree and living room is wonderous!!! WWOOWW!!!
Kisses Smile, sing and be glad!
It's Christmas! It's Christmas!
Merry Christmas to you and your family!
From our family to yours
Nellie