TUXY AND TABBY TUESDAY WITH DOMINO, DYLAN AND DANTE

We have been flirting with snow of late.  We'll get a dusting and then it will melt again, only to reappear a day or so later.

It certainly hasn't kept my darling 3-Ds from their appointed rounds.  Witness ... 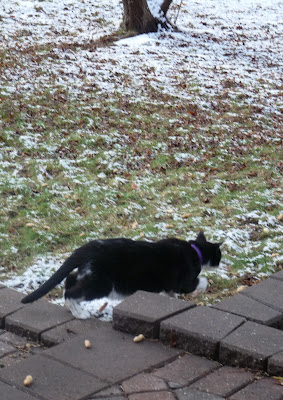 Here's the intrepid Domino on a scouting mission. 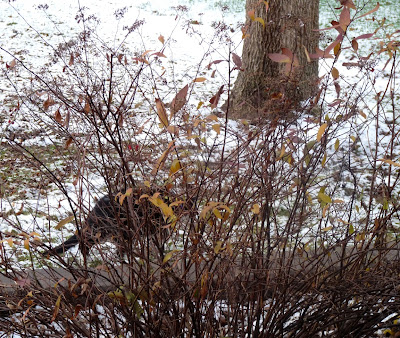 First she must check out what's new in our front yard ... 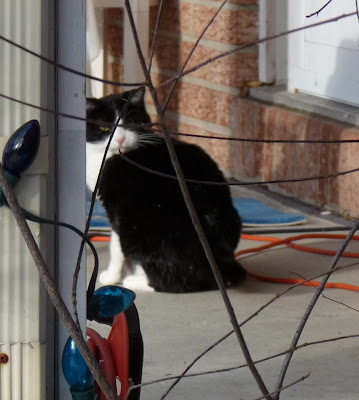 ... before she PURRuses the neighbour's porch! 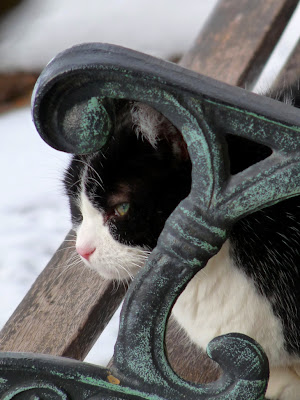 Of course, to Domino, it all belongs to her anyway -- one way or another. 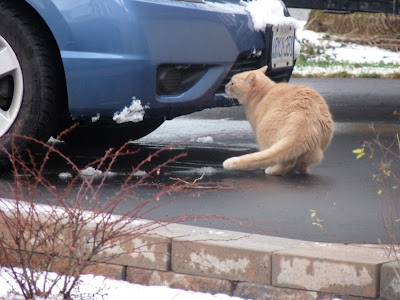 Dylan takes a whiff of the neighbour's grill (and I don't mean the BBQ). 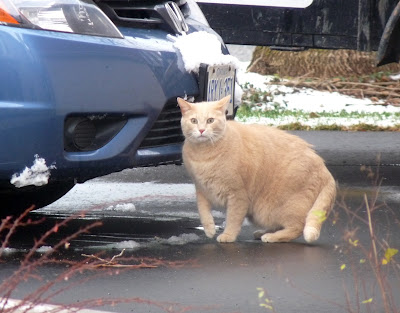 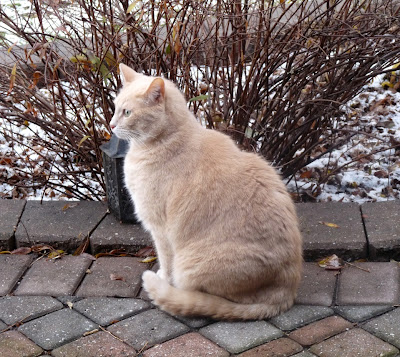 Best to come back home where the air is fresh and clear. 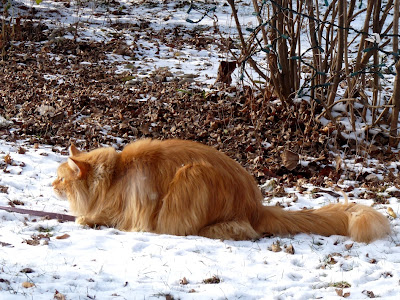 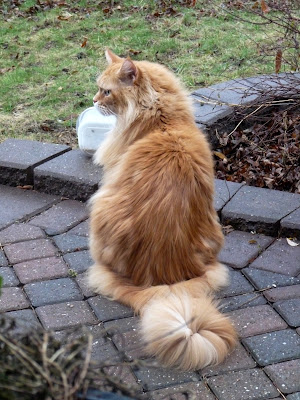 The next day after the rain has washed the snow away ... 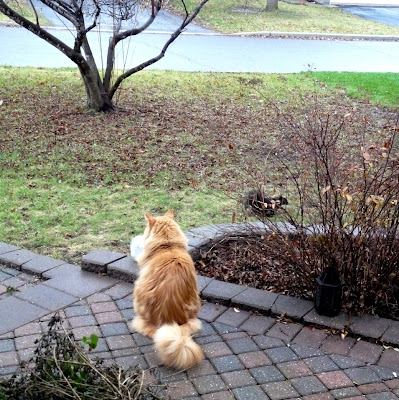 ... Dante doesn't fare much better.
"You're looking the wrong way, dummy!"
Tuxy or tabby, some things are the same.  They're nosy and snoopy and always quite game.
Posted by CCL Wendy at Tuesday, December 06, 2011

Thank goodness your snow went away.
We can see you are all safe after the triple patrol.
Luv Hannah and Lucy xx xx

Well looks like they all had a super time checking everything out. Is that a black squirrel?? We didn't know there was such a thing.It sure is pretty. You three did a great jog snooopervising. Take care. Thanks so much for the purrs for Peepers.

We would wish for a snow-free winter here, but of course that's impossible. :-)

You three are brave to venture out in the chilly air. The mom's having a harder time persuading us to go into our back space these days!

I am glad that you got rid of that snow. It makes it so cold on the toes when doing your rounds.

THey are good at neighborhood patrol

Will you look at that FURostiness!!! I like seeing the 3-Ds against all that BRRRRR frosty ground. It's fun fur a while isn't it!

Is this the same black squirrel I've been seeing you stalk for the past couple of years, Dante? Maybe eventually he will get so old you will be able to catch him!

Good work doing your snoopervising patrol, but it is about time you caught that pesky squirrel.

We've been having the same kinda weather...a little snow, then some rain. You guys are pretty brave to venture out there. We're wusses and we don't like the cold!!

Does that black squirrel have a name? he is getting to be really well known, now! He he!

Lovely pics ~ sorry we;re late visitong, mom has had a holiday from work this week and been out and about.

I'm on my way over to see beautiful Dommy if that's OK? See yoo soon!