TUXY TUESDAY WITH DOMINO P.I.: THE CASE OF THE MISSING GARDEN

In addition to efurrything else that Domino does on a regular basis, she moonlights as a PURRivate InvestiCATor -- actually she moonlights mostly during the day, but will do whatever it takes to solve a case.  If this means doing a stakeout after midnight, she's all for it! 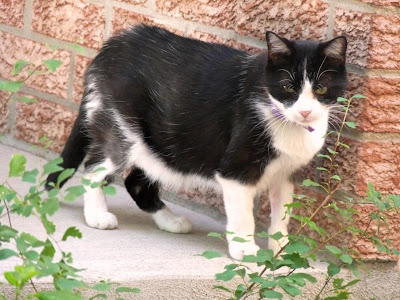 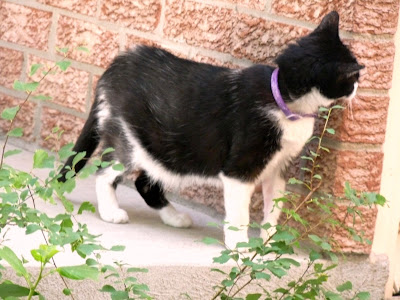 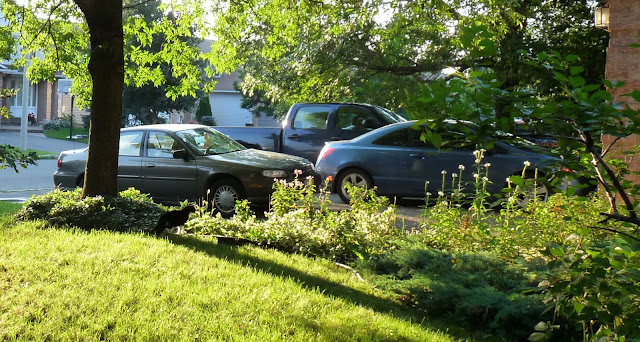 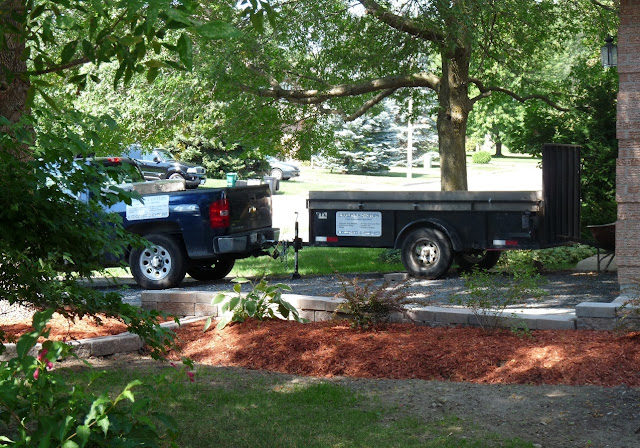 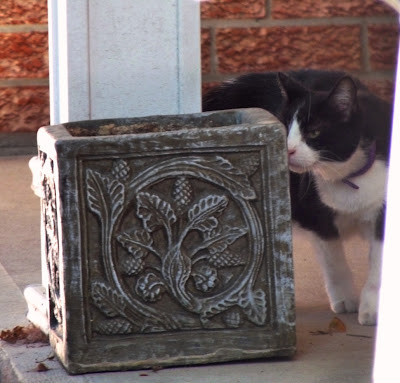 Domino starts by investigating the porch.  There's not much new except this heavy stone urn. 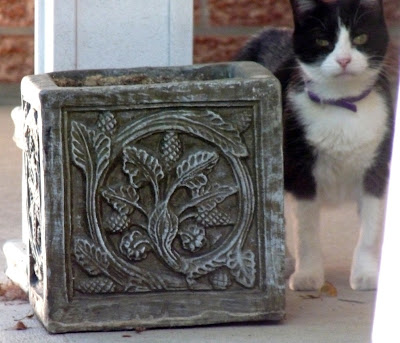 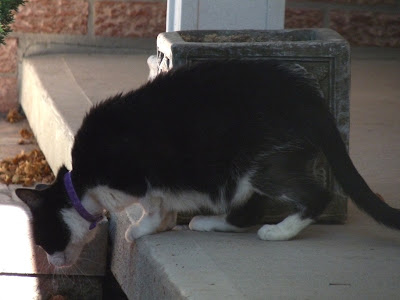 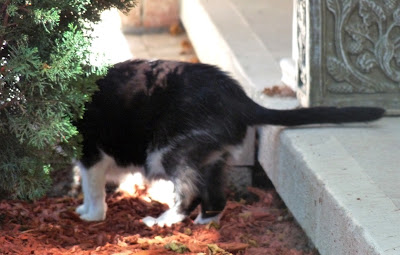 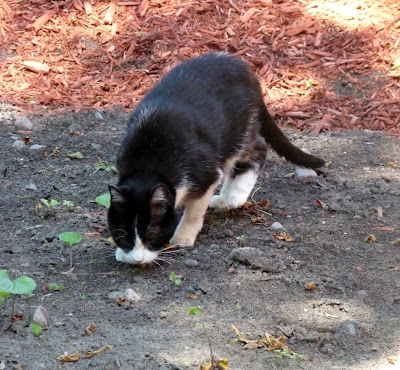 However, where there used to be a lush garden, there's now just dry earth. 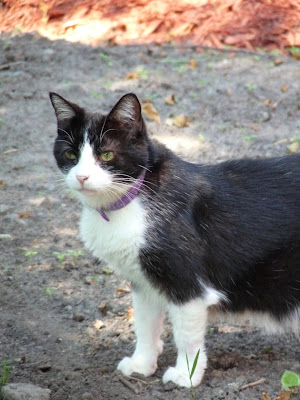 "Dis is a case fur Inspectah Domino!  I calls it da "Case of da Missin' Gardin". 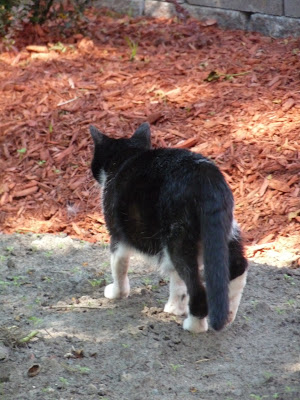 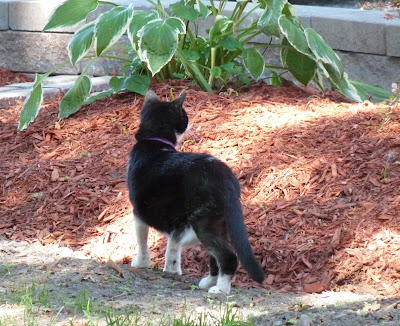 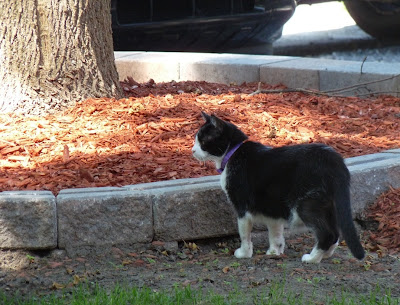 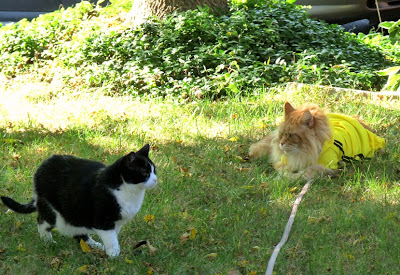 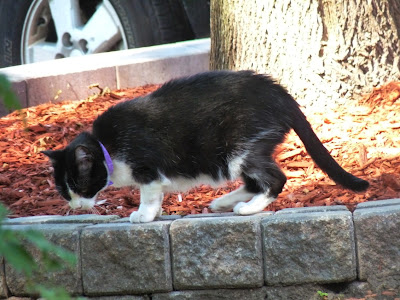 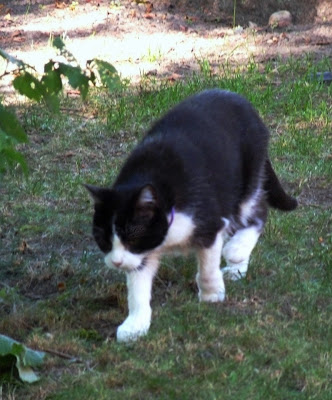 "I'm afraid I'm gonna hasta turn dis wun ovah to da PAWlice!  I has dun da legwork, but dey hasta lay da charges.  Dere's a long list of offences!  I noes I'm certainly offended by dis travesty, so I'm gonna giff da cops all of da evidents dat I fownd."
Later that day the neighbours were charged with vandalism, kidnapping and murder.  They were undeniably the culPURRits responsible for destruction of a garden, holding a hosta against it's will, and killing perfectly healthy plants, flowers and bushes only to replace them with a Martian landscape!
Well done, Domino!
Case closed.
Posted by CCL Wendy at Tuesday, August 30, 2011

Good job, Domino! You're an excellent investigator...Maybe you could have your own television program! A garden CSI show, purrhaps.

We certainly hope your neighbours paid a hefty fine, at the very least, for their garden mayhem!

Congrats on another handed over to the pawlease to wrap up. We would be interested in following a gardening programme if you were in charge Domino.
Luv Hannah and Lucy xx xx

Oh Domino you are just brilliant!!!

That is quite the investigation you did sweet one!!!

We think for a fine you should let Dante release his "inferno" (inFURRno?)on the red mulch, Domino!

You are a very thorough investigator Domino!

I bet the gardener did it!

Good job! Though, we rather like what the neighbors have done...

Will be round EARLY to collect yoo for yoor birthday! Alfie can't wait to see yoo too.

Domino, I'm sure gardens everywhere are breathing a sigh of relief with you on the job!

Domino, that was a suPURR investigating job! Now why they want to kill in-no-scent flowers like dat? We are proud of you.

We want to tell you too, we are so sorry we did not get back to you back at the beginning of August. But see, our Mumsy has been having serious organizational problems. We so appreciate your kind invitation to be LOL-Cats! We are so excited! We'd love to do that! You are most welcome to use pictures from our site. We just so appreciate the invitation, please don't let our Mumsy's lack of organization think we don't. Please let us know what else we can do, as we are just so pleased and excited! Thank you, thank you, thank you!
Many (((hugs))) and kitty kisses


Happy birthday Domino! We're just gonna collect lola, then back to our place to party!

Hey, Domino, happy birthday! (Thursday the 1st). We hope your mom will do a b-day post for you...we'll be back later to check! :-)

Meanwhile, we see you've teleported over for Alfie's b-day!

Alasandra, The Cats and Dogs said...

Hope you have a Happy Birthday!