Dylan's in the "Outback" today, aka the back yard.  He is exploring the wild uncharted territory near the fence.  You see, his blood sister lives next door, on the other side of that fence, and every now and then he gets a whiff of her -- and maybe even a brief glance through the spaces between slats. 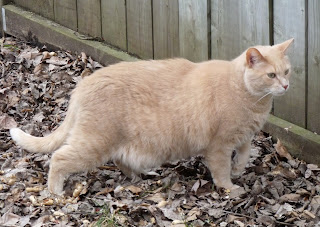 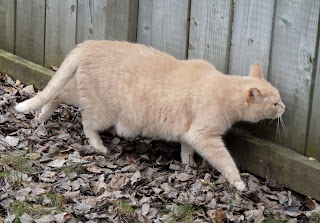 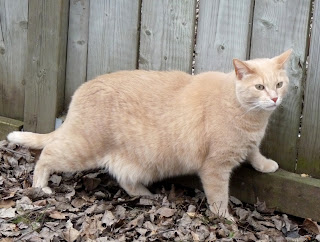 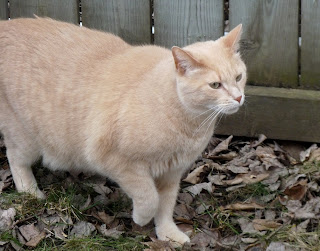 Although Dylan would give anything to actually meet his sister again, Buttons just won't have it.  Apparently she's scared silly of her bro, and will shake uncontrollably at the mere sight of him through the glass patio door.  So, this is an undercover picture we took of Buttons last year, from a distance, using the Zoom lens.

She's gotten a little chunky in recent years.  I guess it runs in the furmily!  Notwithstanding (because she's sort of sitting, actually), Buttons is a beautiful colorpoint shorthair with peachy-coloured points and bright blue eyes -- a testament to some Siamese blood along the way.
However, I digress.  This post is sup-post to be all about Dylan.  So to wrap things up, here are some close-up portraits of the dear boy.  You will note he is constantly on alert when he's in the outback.  No sound or movement goes undetected.  His ears are always a-twitchin'! 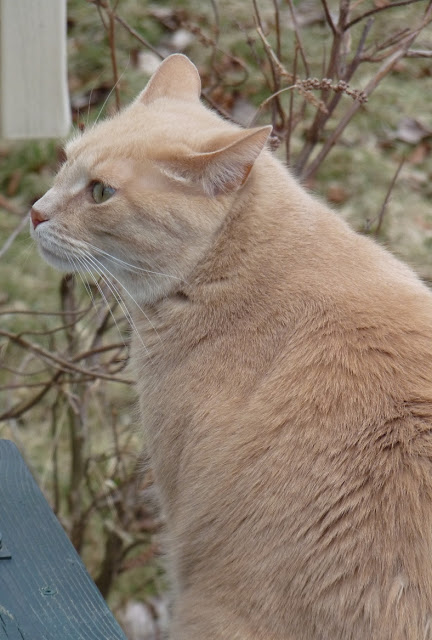 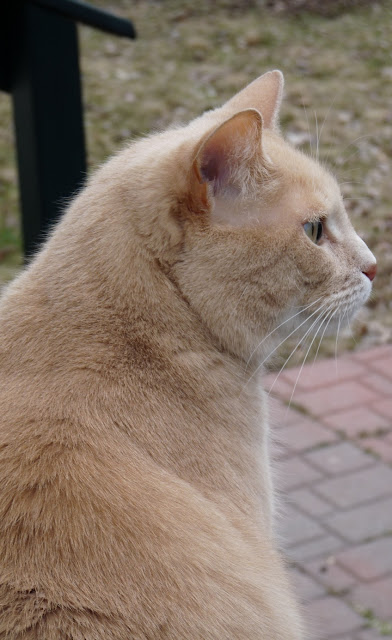 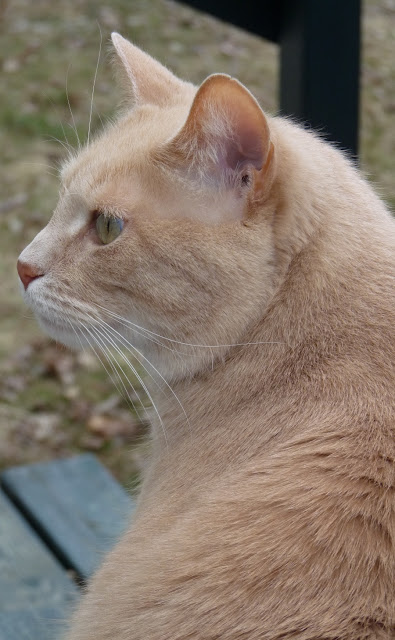 So now we've established that Dylan is a nosy neighPURR, a scarer of sisters and a scaredy-cat himself, and that, as they say -- is that!  At least for today.
Posted by CCL Wendy at Monday, April 18, 2011

It looks like you had a great adventure in the "outback," Dylan!

We're sorry your sister is afraid of you, but maybe she's afraid of all kitties, not just you?

Dylan - we didn't know your sisfur lived next door - she is scared of you but you seem to be a furry gentle mancat - are you a bit of a Jekyll and Hyde mancat or doesn't she want you to see she is a little heavier than you?
Luv Hannah and Lucy xx xx

Derry you were very brave in the Outback today. We wish your sister wasn't so afraid of you...what a cute pair you are!

Yes, but he is also handsome, cute, daring and adventurous! And we love him!

What a handsome chap Dylan is. Hopefully one day his sister will come and say hi

I think Dylan and his sister are the most beautiful peach colour! Is there a difference between peach and buff?

Dylan your sister Buttons is so pretty. We are all very afraid of our brothers cause they chase us. In general, just mean. So we understand Buttons, totally.
Dylan, those are such good pictures of you. You are extremely handsome.

We don't understand why your adorable sister would be afraid of you, Dylan! Maybe she has you mistaken for another, less sweet brother

Dylan, we think you would be a purrfect gentleman with your beautiful sister Buttons. Too bad she's afraid, you would look stunning together!

Buttons is a pretty lady cat!

That is too bad Dylan's sister is scared of him! It would be so nice for him and Buttons to be friends.

Dylan, it looks the outback is a fun place for you to explore. Too bad Buttons is so scared of you. You two do look very much alike; she should realize you are family. We always love seeing the close ups of your handsome face.

Dylan- Good to see you out and about in the springtime weather!