It's Monday and the mancats are out in tandem checking out their territory as far as they can.  This involves sniffing around the front walkway, and the porch, including the benches and chairs.  After all, squirrels have been spotted, and with all the nuts that mama scattered about, they've left their scent just about efurrywhere!

Now it's up to the mancats to take up the trail. 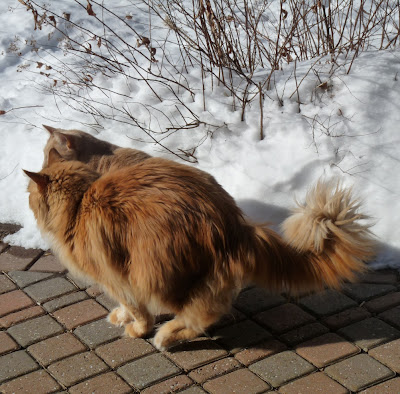 Dante and Dylan team up to discuss their strategy. 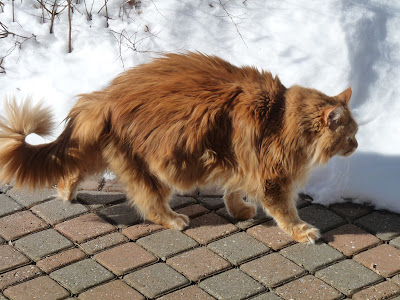 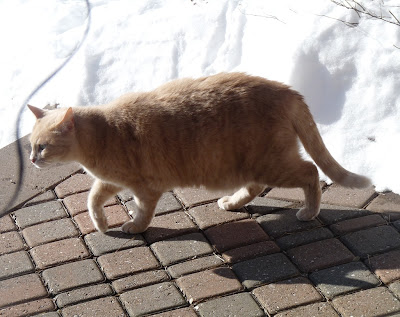 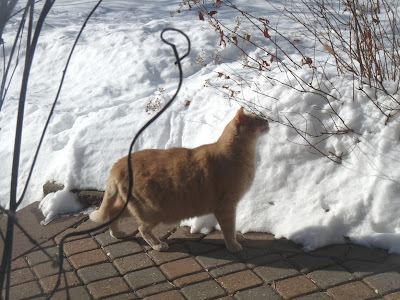 Dylan sniffs out the bushes to see if they've been disturbed by alien PURResences (aka squirrels). 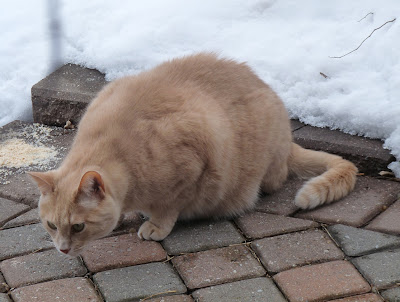 "Hmmm!  Sumfing smells different around here!"
Mama put breadcrumbs out for the birdies. 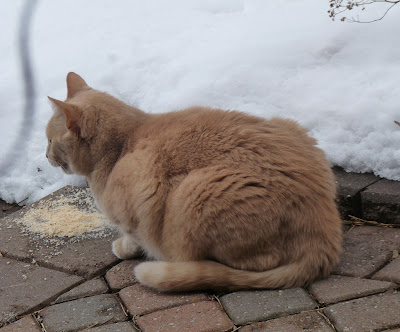 "An' it sure duzn't taste bad eider!"
You could stand to lay off the carbs, there, Dylan. 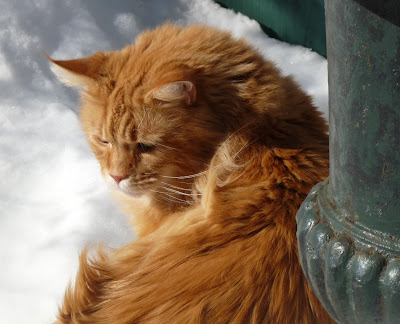 In the meantime, Dante is checking things out rather URNestly. 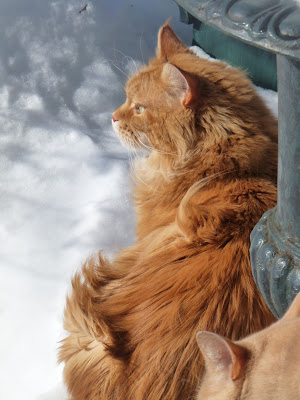 Dylan touches base with him (and the urn). 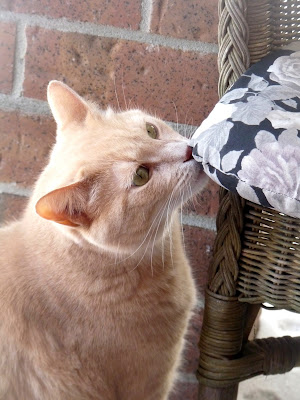 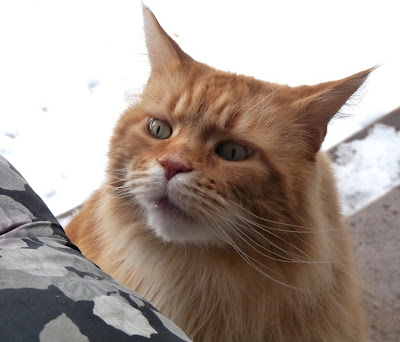 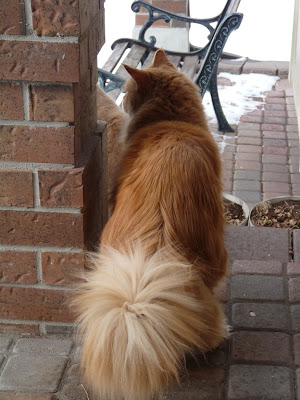 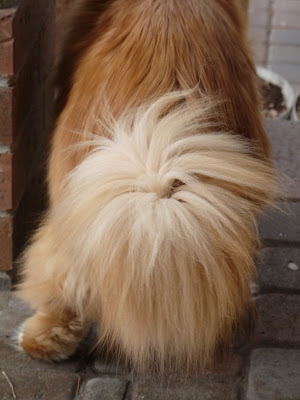 Dante's tail poofs out in anticipation. 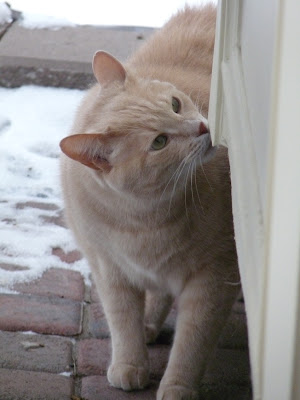 Dylan decides to check out the front of the house, under the bay window.  "Dis winnow sure didunt keep dose squirrels at bay!", says he. 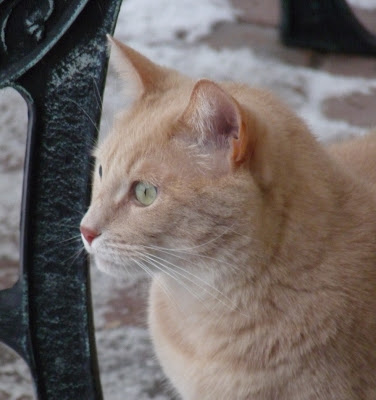 The scent trail sent Dylan this way -- towards the bench. 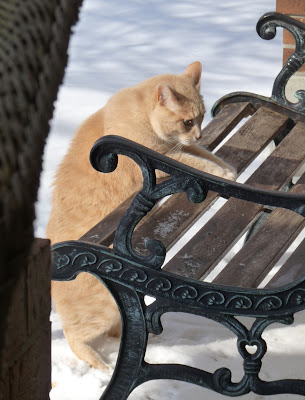 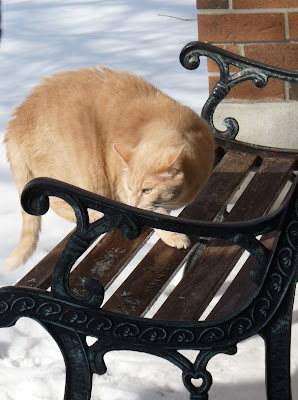 "I finks dey's been using our bench as a lunch cafeteria", deduces Dylan. 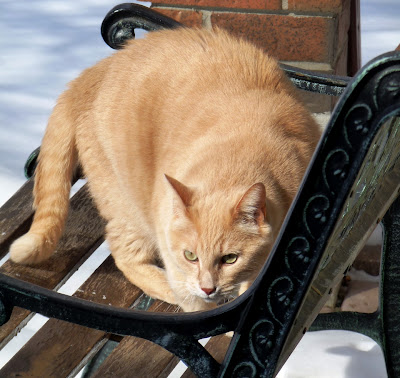 "An' dey doan even bodder to clean off dere crums!" 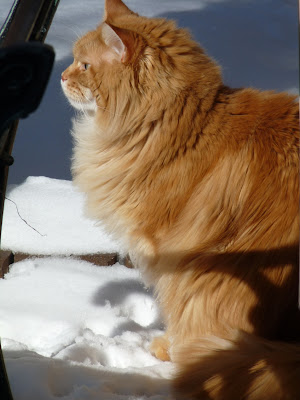 Meanwhile, Dante has been checking out the far side of the house. 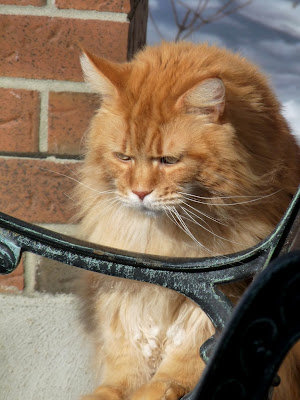 He, too, is attracted to the bench. 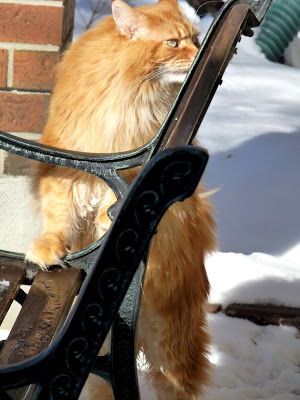 Here, the scent is so strong that Dante is sure he has an iron-clad case. 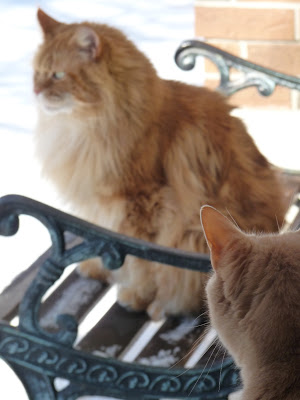 Even though Dylan has already given his opinion, once again Dante is there to confirm it. 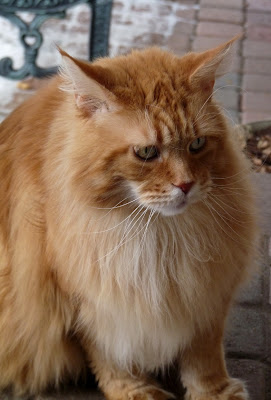 "Well, I fink we has done all dat we can, fur now", declares Dante. 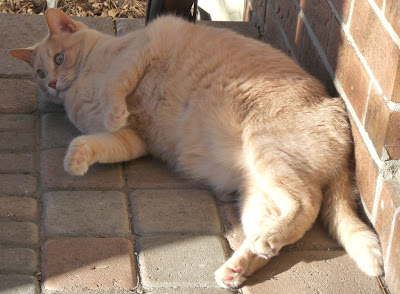 "Eggcept for leavin' our own scent on da place", says Dylan and then he does just that!  He's on a roll after all. 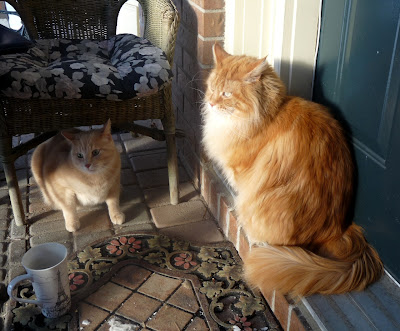 Exhausted from their extensive investigations, the mancats have returned to home base.  Sometimes the job may be TEAdious, but somebody's gotta do it!  And my mancats always do the DE SCENT thing.
Posted by CCL Wendy at Monday, February 21, 2011

Fantastic hunting. You guys look great being orange against the snow.

You have been furry busy detective mancats checking out the smells and paw prints left by those evil squirrels. We hope your mom had a delicious dinner waiting for you after all those investigations. We've heard that this kind of work makes mancats furry hungry.
luv Hannah and Lucy xx xx

OK - that was hilarious. Enjoyed the hunt along with you. Great photos of two great guys. Hugs, Deb=^..^=x5

You two make a fabulous hunting team! Handsome too!

You did a great job you guys!

You buys know how to do a thorough investigation...we loved it!

Wow, you two are certainly thorough in your investigations!

Dante and Dylan are the BEST super sleuths!!! I was on the edge of my seat wondering what they would fine!

Great job of patrolling your house!

You boys are a hoot...oh wait, that would be OWLS! We can't think of a good squirrel analogy.

You have both done a very thorough investigation. Nothing escapes your notice.

You guys are so thorough! Do you have to submit a report now?

Teri and her Stylish Cats said...

LOVE reds & creams... Such beautiful boys... They really look like they are on an important mission.