Real mancats DO dress up!  Even Dylan, who is famously anti-clothing agreed to put on a red scarf as a salute to this festive season.

Seeing him in this crimson garb, reminds me of one of my most favourite songs titled "Loving You Has Made Me Bananas".  The lyrics, especially the first line, sum it all up:


"OH, YOUR RED SCARF MATCHES YOUR EYES,
YOU CLOSED YOUR COVER BEFORE STRIKING,
FATHER HAD THE SHIPFITTER BLUES,
LOVING YOU HAS MADE ME BANANAS"
Is anybody familiar with this song? 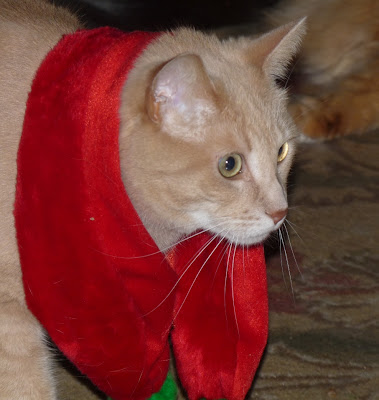 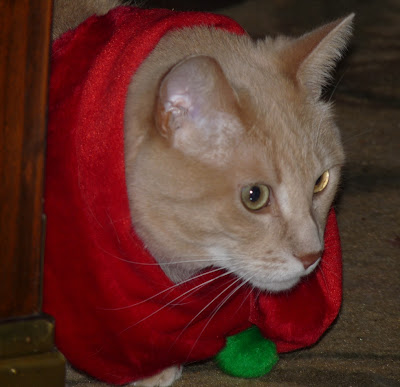 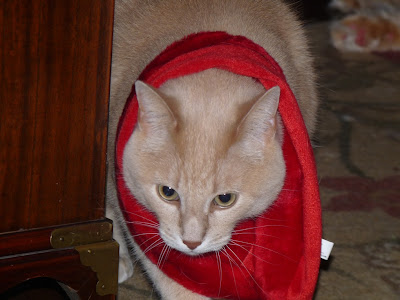 Well, at least Dylan did NOT go bananas!  He tolerated his red scarf quite well until he finally managed to wriggle out of it.  Mama is seriously indebted to him for providing this once-in-a-lifetime photo op.  And while the red scarf may not match his eyes, it certainly complements them.  Red is a very becoming colour on him, don't you think? 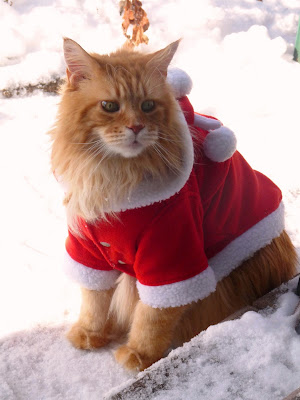 And then there's Dante!  The veteran wearer of outfits in every colour under the sun.  Once again, red is PURRticularly 'suited' to him  -- especially in this Santa suit!  You have to admit he really stands out in the snow, doesn't he?  I guess it's a little too chilly to lie down. 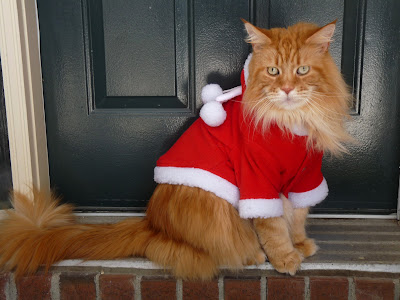 Dante strikes a pose against the dark green of the front door.  He's having a real ball, can't you tell? 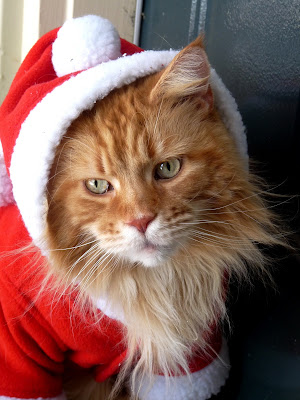 Dante's in the mood for a "HOdown".
"Ho, ho, holy hood", he says.  "Get dis fing offa me!"
Dylan and Dante wish efurryone out there a truly Merry Mancat Monday!  They hope the sacrifice of their dignity for your amewsment (and mine) has brought you some seasonal joy.
Posted by CCL Wendy at Monday, December 20, 2010

Dylan and Dante both look fabulous in red, very striking. And very festive!

P.S. The Mom says she's not at all familiar with that song! :-D

You are both looking great--we don't know the song either!

Our mum knows that song but then she's past ancient - more pre-historic!!
Both Dylan and Dante look good in red unlike Rudolph with his red nose!!

You are both just stunning in your outfits!

Mommy has never heard that song...she's gonna Google it!

You ManCats DO look good in red. Dylan, we hate wearing stuff too, not at all like Dante. We fight fight fight like mad to get the stuff off.

Dante and Dylan both look great in their red Christmas gear!!! I particularly like Dante's hood on his santa suit...what very cooperative boys you have :-)

We are going to try and take some pics of our kitties in their christmas antlers but frankly I'm not that optimistic - LOL!

Oh Dylan, you're very handsome in your red scarf! And Dante...what a cute Santa Cat you make!!

My human has never heard that song. But then most of the stuff she remembers from her youth has lyrics like, "Beat on the brat with a baseball bat oh yeah oh yeah oh-oh" and "We're the poison in your human machine." I'm glad she does not try to dress me up to match THOSE lyrics! I'm sure Dylan and Dante were glad to get out of their outfits, but they did a nice job of modeling them.

Dante my friend, you don't look so thrilled in that first one, but it looks like it grew on you by the last one (and you look very dapper in your hood!)

Awww, that last photo of Dante is so sweet and adorable!

Those were gorgeous photos of the boys dressed up! WE have never heard of that song--we'll have to do a search for it.

Manly in red... both of you! Your momma went all out for Christmas clothes for you kids this year! : ) VERY cute!