Poor Domino!  If you follow Domino's modelling career, you know that she just loves to pose, but what she hates more than anything are hats (or hoods).

To be fair, this was not mama's idea.  Domino's Auntie Susan gave her this gorgeous Santa hat.  Now it would be rude not to wear it, at least once, don't you think? 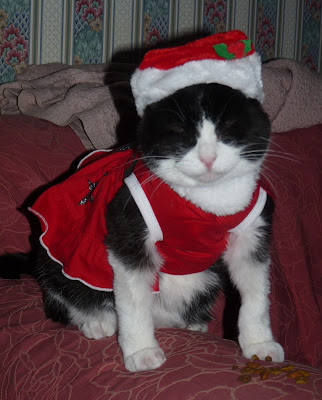 Domino is such a good sport.  Here's she sporting her new hat which happens to match her red Diva dress. 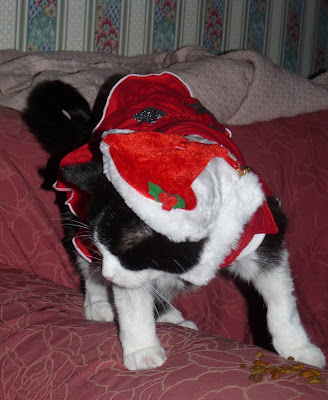 Mama ordered a Santa dress for Domino, but it hasn't arrived in the mail yet.  So the Diva dress will have to do under the circumstances. 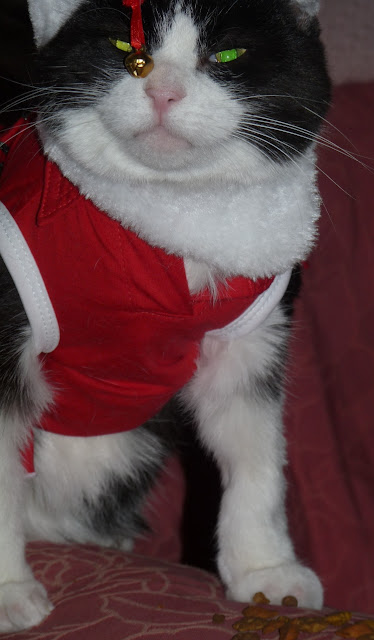 Ah!  There are your beautiful green eyes, Domino!  She's not as used to these indoor photoshoots, and understandly closes her eyes against the flash most often. 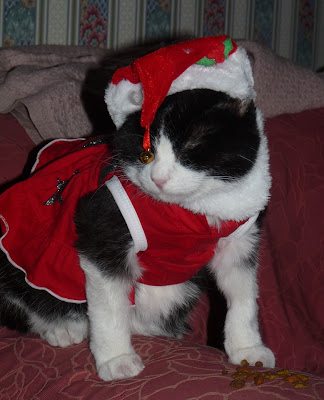 Most kitties might find that bell annoying, but Domino, with her usual aplomb, tolerates it just fine.
What she won't sacrifice for the PURRfect photoshoot! 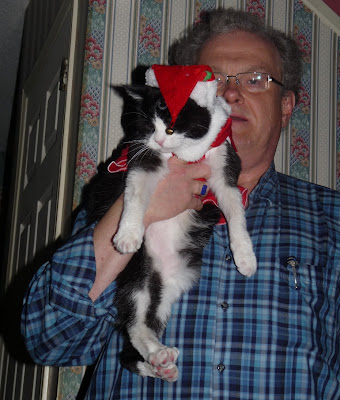 Awwww!  Isn't this cute?  Domino with her Dada.  As a bonus you get a tummy and toesies shot!
(Biggify to see them closer) 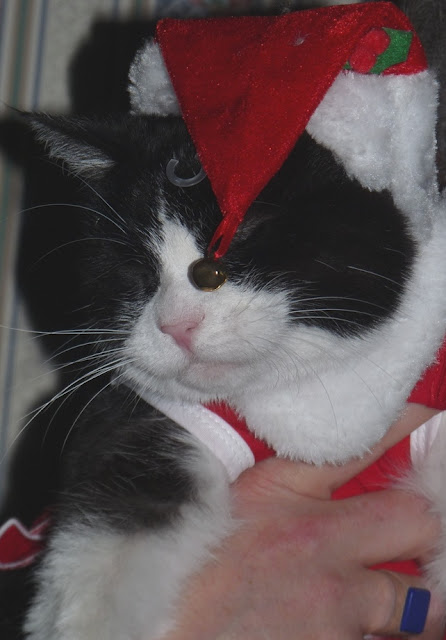 Domino would like to wish efurryone out there a Mewy Chrismouse.  She's going to visit Milo on Chrismouse Eve -- and she'll be there with bells on (of course).
Posted by CCL Wendy at Tuesday, December 21, 2010

You're the most adorable Santa's helper we've ever seen, Domino!

Domino, you really do look stunning in red! Gorgeous!

We wish you all a very merry Christmas too...and a joyous Solstice!

I'n changing my name to Santa, so yoo can be MY little helper! I can't wait to see yoo on ChrisMouse Eve!

You look great as a Santa Diva, Domino!

Domino, you are gonna get a TON of pressies from Sandy Claws for being such a good, tolerant Cat.

Domino you are such a good natured kitty to pose so nicely even though you dont like hats. We think you look great and that bell is fantastic!!! You look so tiny in you Daddy's arms.

We wish you and your family a happy holiday.

But Domino, you really DO look adorable!

Well done! You'll get some extra goodies in your stocking for that!!

How sweet you look Domino. Wishing you and yours a very Merry Christmas!

Just to let yoo know that Dommy has arrived safely ~ and I will see her safely back before midnight!

Greetings at Christmas to yoo all ~ may you have friends at your fire, blessings in your home, and joy in your heart. Merry Christmas dear friends.

Domino RED is your color darling! It really sets off your PURRistine black & white tuxy furs!!!

Oh Domino, even though you hate hats (which we totally understand) you do look so adorable in your Christmas outfit!!