You may recall, as I have mentioned previously, that Dylan's littermate, Buttons, lives right next door to us.  Despite this, I have never been able to get a picture of them anywhere near each other.  In fact, it's very difficult even to get a picture of Buttons by herself.

She is a fencewalker, like Dylan, but is usually partially hidden by trees or bushes.  Yesterday, I was fortunate enough to get a clear opportunity, and I took it.  Buttons came out of her driveway and onto the road in front of ours.  So, with my zoom lens, I was able to capture a few decent pictures of her. 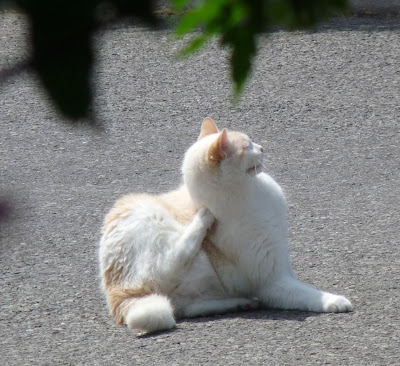 Doesn't matter where you are -- when you're itchy, you've just got to scratch! 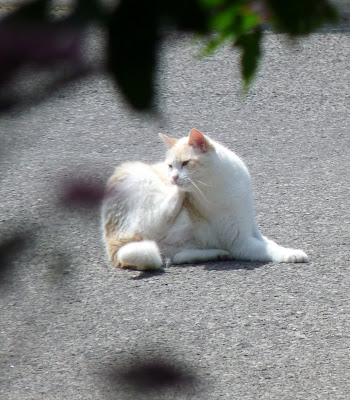 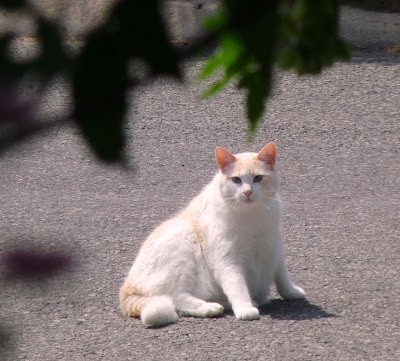 Buttons will be 6 years old on July 27th (as will Dylan, of course). 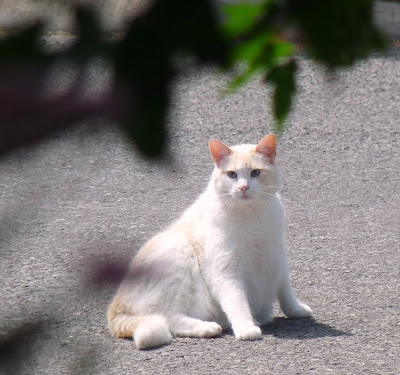 Buttons is a 'Colour-Point Shorthair' with blue eyes.   This means that at some point in her ancestry (and Dylan's by default), there was some Siamese in the mix.  She has the 'points' of a Siamese, except that she's white. Her particular colour, I believe, is called a 'Flamepoint' because of the dilute red.

Buttons belongs to our next-door neighbour, but was chosen specifically for their younger son, Zachary.  Here's a picture of Zachary holding Dante.

Buttons is definitely Zachary's cat -- she has claimed him, as much as he has claimed her, and sleeps with him every night, after walking back and forth on top of him sufficiently.
Zach's mom had originally dubbed her "Miss E".  Apparently the 'E' stands for 'Evil'.  She rules the roost (the cat, not the mom) including her adopted sister Bella, who preceded her.  However, Zach wanted to name her 'Buttons', so that was her ultimate moniker (though I really think 'Miss E' is more descriptive).
If anyone leaves food out on the table, Buttons will steal it -- including newly opened tins of tuna which she carries off to parts unknown to consume in her own good time.  Buttons also drags in all kinds of dead things -- and the odd live one -- into the house.  She has a distinct preference for snakes, though her mama does not!
Visitors must beware of Buttons and are warned that if they shut the powder room door, she will throw her entire body at it until it opens again.  She's not a fan of closed doors, and knows just where to land to pop the latch.  Nothing is sacred -- nothing is private.  Buttons owns the house and all the people and everything in it!
Despite all of her feistiness though, there is one thing that makes Buttons literally quake in her boots -- and that is Dylan!  Apparently, she has encountered him on the opposite side of a closed patio door and will just stand there and shake until taking off screaming in the other direction.
So, the only way to have a family reunion between these once familiar littermates is in pictures.  Here I have a couple of comparisons between Buttons and Dylan.  Do you think they look at all alike?

Of course, their colouring is completely different; Buttons is even paler with the flamepoints and blue eyes, and Dylan is a creamy tabby with light green eyes.

As well as sharing a similar build, I can detect a certain facial resemblance.
So here we finally have brother and sister reunited -- even if it is only in pictures.  Have a great Sunday efurryone!
P.S.  In closing, I thought I'd share a birthday poem that Dylan wrote for Buttons on the occasion of their third birthday.
TO BUTTONS,
Happy Birthday number three
So sorry you’re afraid of me
I never truly meant to make
Your legs and tail and body quake
I’d never hurt you – I’m your brother
Yes, it’s me and not the other
If you can quell the urge to shake
We could even share a snake
But until you come around
I’m here waiting to be found
We’ve lots of time to meet, you see
Because you live next door to me!

Buttons is a beauty and Dylan is a sweetheart for writing her a poem!

Wow Buttons is so pretty! what a great poem Dylan wrote her for her birthday.

MOL! We like Button's Cattitude! Perhaps Miss E would have been a better name...

We think Buttons and Dante do look a lot alike, especially in the eye shape and muzzle. We will politely refrain from mentioning that they are both *ahem* HUGE cats...

The poem is funny, Dante certainly has an excellent sense of humor...must get it from his Mom, we think!

What a beauty Buttons is! But I should have guessed that, because Dylan is so handsome.

Ps: Even though we look nothing alike, Domino reminds me so much of myself when she models right down to the drool!

Buttons is a lovely ladycat and I see the family resemblance in the face. Funny how Dylan is the only thing that will make her stop and shake in her booties!

Buttons really is beautiful and looks a lot like her brother. They are both gorgeous. Glad you could get some photos of Buttons.
Have a great day.

Buttons is very pretty. We like Dylan's poem to her.

BUttons is lovely and oh yes I really do see a resemblance in the face!

Buttons and Dylan totally look like brother and sister! Buttons definitely has more than her share of catitude!

Awwwwwwwww!!!! Buttons is a cutie and we hope one day they can meet in person again!! The poem was beautiful!!
Your TX furiends,

Buttons is pretty. In the first picture, Mom thought it was Dylan !

Buttons is very cute ~ but of course we love Dylan!

Buttons is a very pretty girl, and you're very sweet to try to win her over with a poem, Dylan!

She's as CUTE as a Button that's fur sure! So nice to meet Dylan's baby sisFUR!!! Happy Birthday too!

Definitely see the resemblence. She is beautiful, too. My goodness, Dylan is a big boy, isn't he! You can't always tell until someone holds them for a reference point.

I loved seeing pictures of Buttons today...how fun to have a sister living so close by! I think they both have the 'wild eyed' look going for them. Both are beautiful too!