Dante isn't one for climbing trees, or fences, or anything for that matter.  Dylan, on the other hand, is our champion climber.

Dante hasn't been having much luck with those pesky squirrels, try as he might, so he decides to enlist Dylan's help. 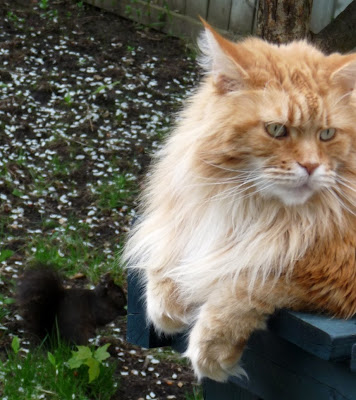 "Hey bro!  Dose pesky black rodunts is back to tease us again", says Dante to Dylan.  "Come here, I has a plan!". 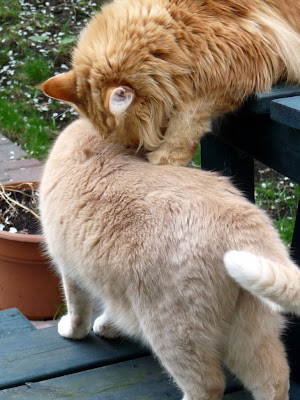 "Pssst, psst, psst ..."
It's a secret plan.  Dante doesn't want the squirrels to overhear, so he whispurrs in Dylan's ear. 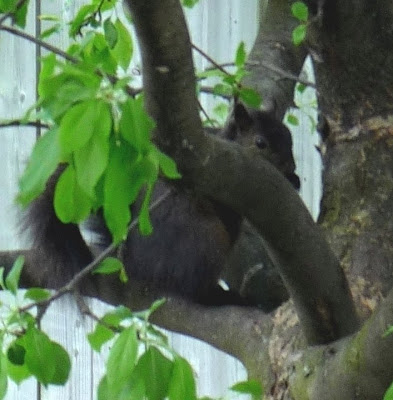 There's one of those black beasts now, taunting from the safety of the tree.
"Na na na na na na!  Catch me if you can, dummies!" 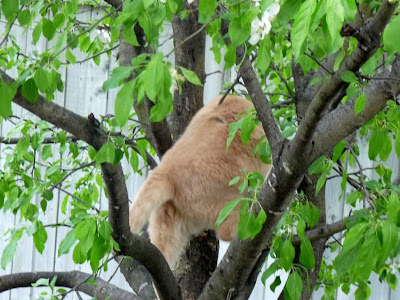 And in a flash, Dylan leaps into the tree! 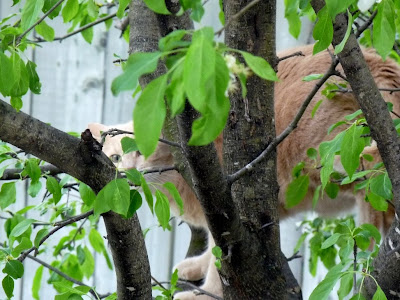 Only to be thwarted yet again!
"Dat little demon just disappeared into thin air!", remarks Dylan in total surprise and frustration. 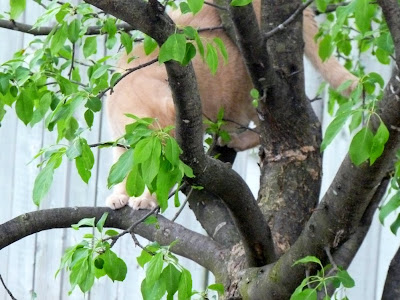 "Let me check around fur clues." 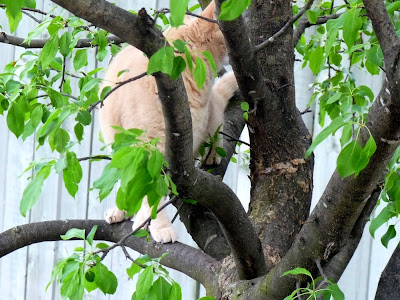 "Did he jump up onto da fence?" 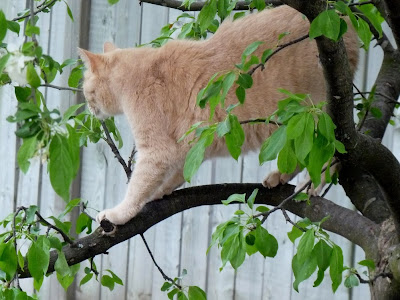 "Or hop off dis branch?" 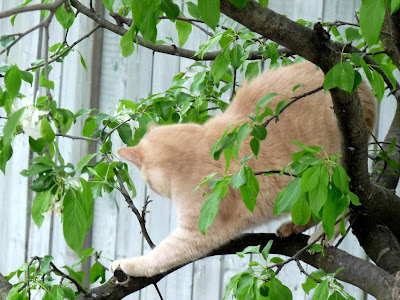 "Seems kind of high to me." 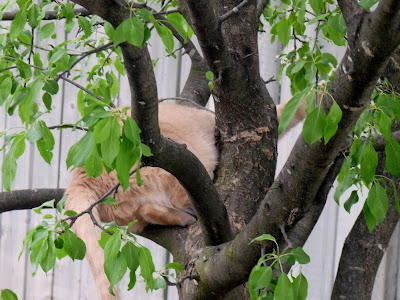 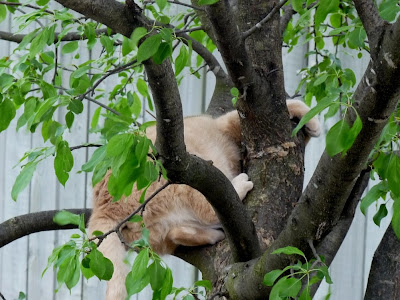 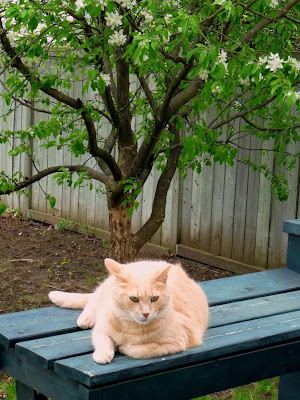 "Dere has to be a bettah way!", says Dylan in disgust.
Ah well!  The best laid plans of squirrels and cats gang aft aglay.
At least it worked out for the squirrel.
P.S.  Note to Paddy and Dushi of "Cats in Trees" -- got any suggestions?
Posted by CCL Wendy at Friday, May 07, 2010

Dylan that was quite the squirrel hunting adventure! I think that squirrel had teased you just about enough! When we were feeding the birds- our kitties would come nose to nose with our squirrel friends- with a screen and glass in between them! Alas, no longer... The smooth tailed squirrels started coming around and the feeders had to go! XO 8GR8CATS

Dylan, you are quite the tree-climber! Better luck next time on getting Mr. or Ms. Squirrel!

You are so brave, Dylan! We hope you get help in catching them squirrels!

We were going to suggest asking Paddy and Dushi for some tree-climbing help, but we see you've already thought of it! Good effort you two!

We LOVE your boys; they are both gorgeous!...We are very impressed with Dylan's squirrel hunting/tree climbing abilities...Where was Domino?...Maybe they need their sisters help for a successful hunt!!MOL...Happy weekend sweet friends...xo...Calle, Halle, Sukki

I think those black squirrels are extra crafty! (The fox squirrels here have more guts than brains.) I think calling in the experts is a good idea.

That little black fella is a rascal!

Ohhh my gosh those are fantastic photos!
You look so handsome against the green on the tree.
I'd like to try my hand at tree climbing, but my brother and sister are laughing at me. They say I'm too unco!

Dylan you show a lot of initiative jumping up into that tree to get those squirrels. And Dante, getting Dylan to go up there for you is definitely a good plan.

Actually, Dylan looks so natural in the tree, we don't think he needs advice. If he can't catch that squirrel it must have some sort of magical powers.
Our suggestion is: just sit in the tree and relax. Eventually the squirrel will become overconfident and that is the time to surprise him.

Good try, but we think yoo need a master class from Paddy and Dushi.

Hi Domino,
I'm flying over to see yoo today on my boogie mat. I thort we cud hang owt together and have good times. See yoo abowt lunchtime. Mom sid I can stay over, if it's OK wiv yoo and come home tomorrow.