DYLAN IS HATUS MANUS CATUS: GUESS WHO'S COMING TO DINNER!

Dylan's on his way to the pet shop to pick up something for dinner.  He's having guests today.  Can you guess WHO?

Here's a hint:  Dylan only deigns to invite those on the "Who's Who" list for Canada.  It saves on getting your 'woods-be' guests pre-screened, and it's much more polite!

(An Aside:  What Dylan couldn't know was that these two birds of a feather were scam artists who had hacked the "Who's Who" list.  Indeed, they're known for their fowl deeds!) 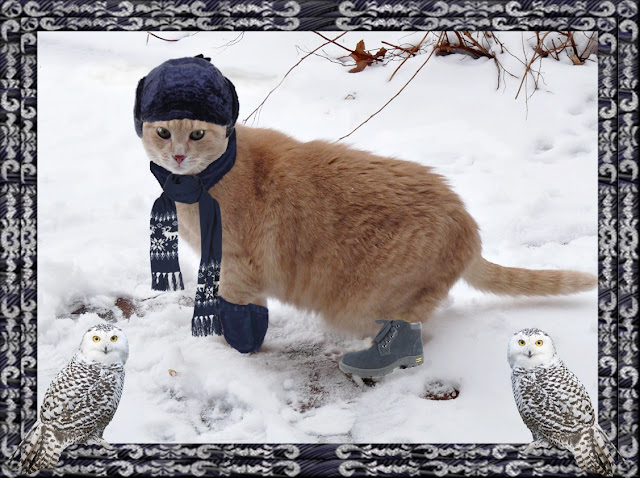 For this expedition to the shopping mall, Dylan is wearing a dark blue faux fur Sherlock Holmes-style hat which nicely covers his ears (even with the ear flaps up).  He has a beautiful dark blue wool scarf decorated with snowflakes and reindeer around his neck, and plain dark blue mittens on his front paws.  He got some new boots for Christmas and is breaking them in for the first time.  They are dark gray suede Timberland boots -- just purrfect for hiking.

When Dylan asked his guests what they might like for dinner, they both replied:  "Something of the rodent variety".  So he bought a particularly large one (good for carving) and brought it home in a bag which he left on the kitchen island.

"O rats -- I'm outta here!" exclaimed the rodent, making his escape along with part of the cheese course.

When Dylan discovered that the main course had mysteriously disappeared (he couldn't help but wonder "Who dunnit?"), he had no choice but to open up a can of worms. 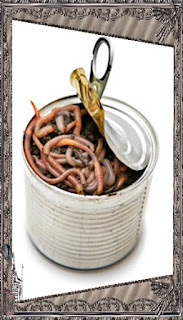 And the moral of this story is ...

... if you worm your way into dinner, you just might have to eat them!
Posted by CCL Wendy at Saturday, January 14, 2017

That was quite a hoot Dylan!!!