Dante, Dylan and Domino have no idea what happened to their Dada.  He just suddenly disappeared!  Dante, who is a Daddy's boy, was actually howling the first few days Dada was gone.  He just couldn't understand why Dada wasn't there to give him scritches, to watch him eat and tell him 'what a good boy' he was.

So last week was rather difficult for kitties, but more so for Dada.  There were ups and downs.  It seems I was a little premature in thinking he would be home for the weekend.  He took a turn for the worse mid-week and developed some breathing problems.  So he was put on oxygen and taken to another unit for closer monitoring.  During this time he was rather incoherent and even hallucinating at times.

However, Dada rallied, and might be home today -- Monday -- as long as he can get another CAT SCAN  first (ironic, huh?).  If not, he should be home on Tuesday.  He is definitely more with it and sounding like the old Dada, and he's raring to come home.

I told the 3-Ds and they thought they'd wait outside for him to arrive, but they could be waiting awhile.  At least it's not too cold out there, even if there are piles of snow. 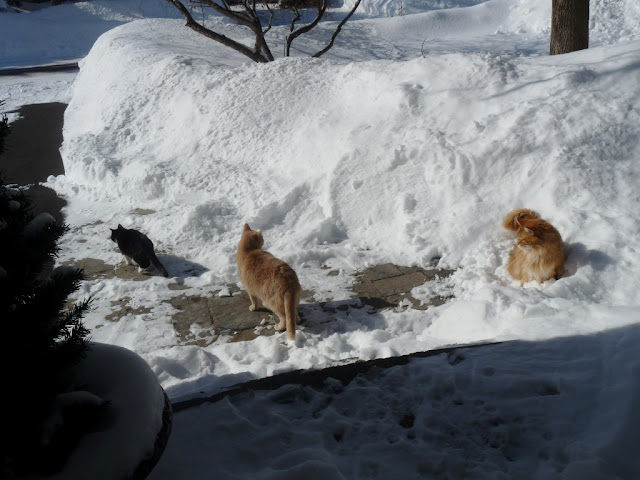 All three of the D's were out on the front walkway waiting for Dada.  Dante thought he'd do a little 'snow business' while he was there (if you get his drift). 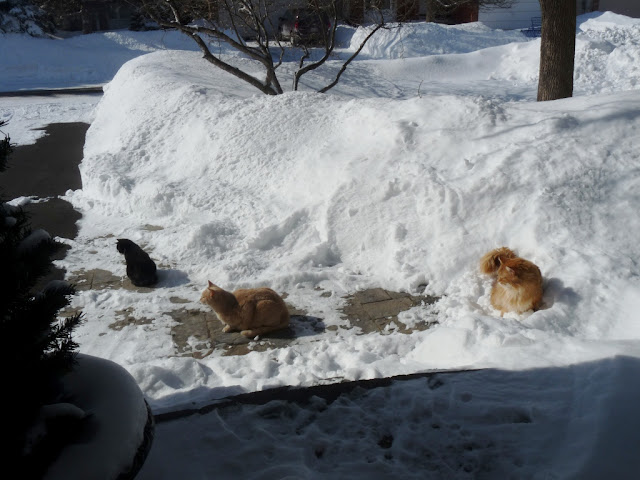 So they waited and waited ... 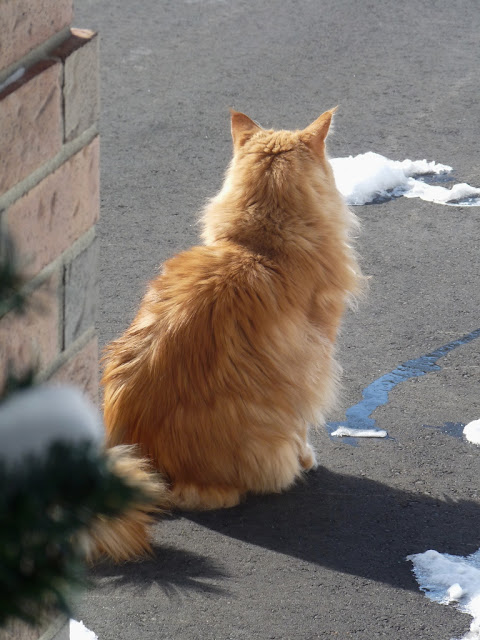 Dante finally finished his business and decided to wait on the driveway.  He could get a better view from there. 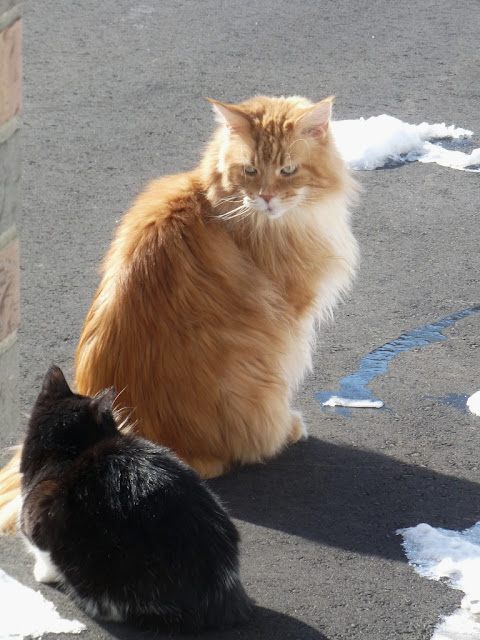 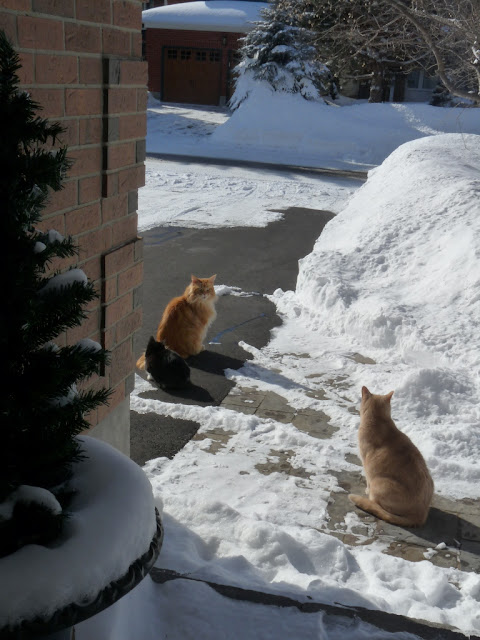 Dante called to Dylan "Come over here bro!  Dada will be here any minit." 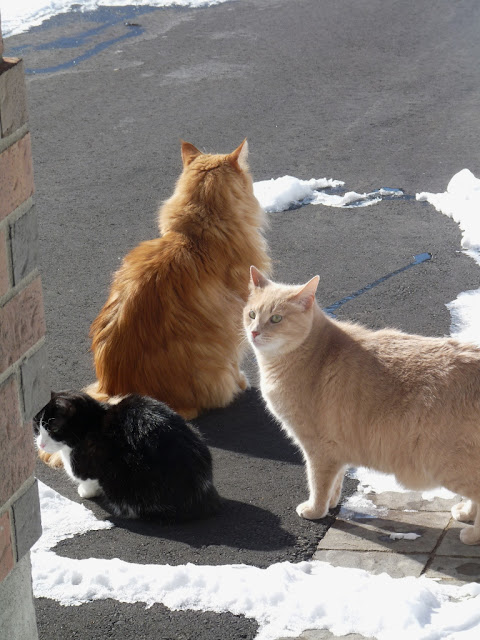 So Dylan came over, but still kept an eye on the front door which was slightly ajar.   He likes to make a quick getaway in case of an emergency. 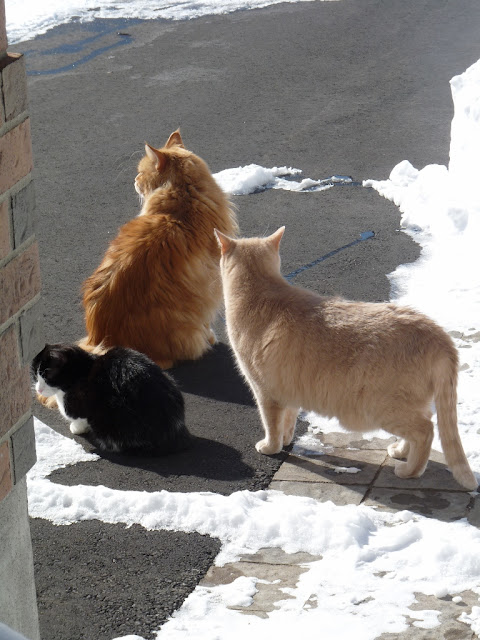 So they looked this way and that, but didn't see Dada. 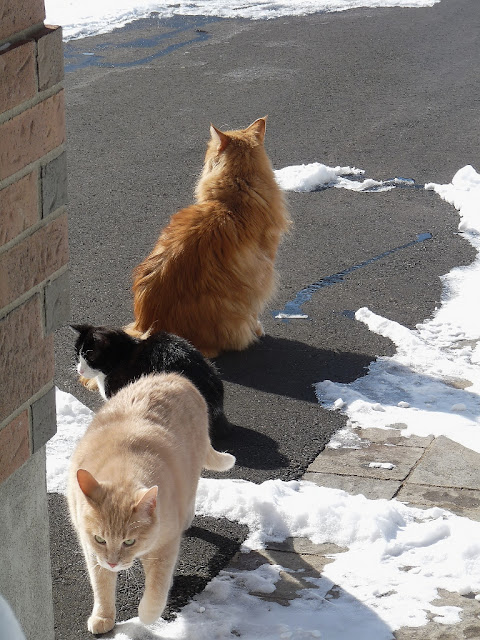 Dylan got nervous every time a car drove by.
"I giffs up!" says Dylan.  "Call me when he gets here." 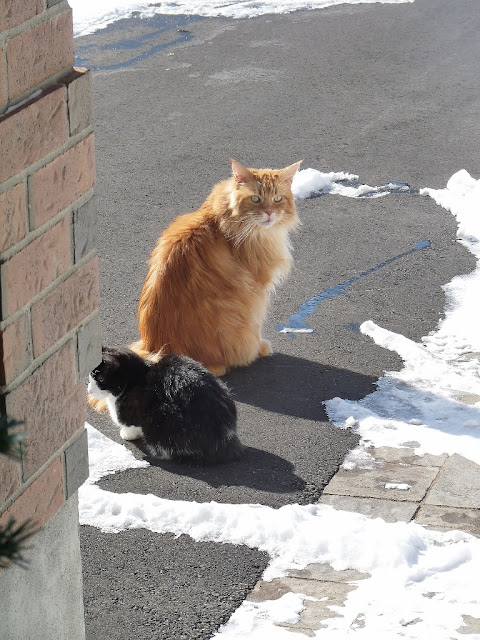 "Wimp!" shouts Dante.  He and Domino continued to wait in the sun.  And they are waiting still.  When he finally arrives home Dada will get the second, third and fourth CAT SCAN of the day.

I'll let you know when that happens.  What a reunion it will be!

I'd like to thank everyone once again, for your continued support during this difficult time.  Your kindness is simply amazing and very much appreciated!

We have all our toes and toes crossed (front and back) for your Dada! Purring that he makes it home on Monday and makes a full recovery...which he should, with you three to nurse him.

Kitties, I hope your male human comes home sooner than later! I bet he will like your cat scans better than the ones at the hospital! I am purring for his early return.

What an overwhelming welcome Dada will get! I had a pancreatitis years ago, it's a really painful experience! And I remember in the hospital I had ONE wish: go home to be with my family and my pets...

Ohh, our hearts go out to you all, what a sad situation. We keep on purring for your daddy.

we are sending TONS of purrs and prayers that your Dad will be home soon and that he will be on the mend!
xoxoxo

We are PURRING and PURRINg that your Dada comes home today and we are SO glad he is feeling better.

We were so in hopes we'd see the happy reunion picture! Hope your daddy gets to come home today :)

We are all still sending purrs too and we hope the homecoming gets there quickly! Sascha sends you hugs Dante.

We is still purraying for Dada! Wes knows how the 3 Ds feels!
Kisses
Nellie

We hope Dada is home or comes home very soon. We shivered when we saw all that snow. We are glad it was not as cold as that snow made it look while you all were out there. We are sending up prayers for Dada. Hugs and nose kisses

We hope your Daddy is home and getting all those cuddles and kisses=we know he missed you guys as much as you missed him!...We are still purring and praying all his tests were good and he is healing quickly...Happy Wednesday, sweet friends...xoxo...J, Calle, Halle, Sukki, Mommy Cat, Daddy Cat