TUXY TUESDAY WITH DOMINO: A TAIL OF WOE!

I've told the tale of Domino's tail before, but it bears repeating.  I am not Domino's first human; I became hers when she was a little over a year old.

My son, Ryan, lived in a townhouse with a couple of roommates at the time.  One of his roommates (whose name I shall not mention) smuggled in a tiny tuxy kitten, despite being told that animals weren't allowed.  When Ryan finally discovered her, of course he let her stay.  In fact, the weekend after getting the kitten he named Domino, the roommate left her to go home for Thanksgiving, without a thought to her care in his absence.

Ryan brought Domino over to our house.  She was the cutest little kitten, with the feistiest PURRsonality!  She did this sideways hop with a wild look in her eyes, as a prelude to pouncing.  We fed her, and pampered her.  She was especially partial to finger foods. 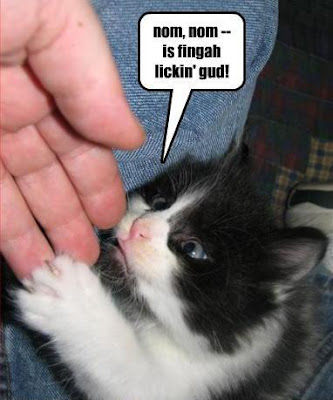 Anyway, this initial abandonment by Domino's human was only a hint of what was to come.  Domino was just fortunate that my son was around to look out for her.
In the intervening year, Domino had a litter of two kittens, and she was the best mother ever.  It changed her from a wild thing to a devoted nurturer.  The kittens were eventually given away to friends of the roommate and their fate is unknown thereafter.
However, by the following November, the roommate moved out, and Ryan thought that was that.  He was later to discover that Domino had been left behind, locked in the garage in the dark.  By the time he found her, after a couple of days, there was no food or water left, and she was ridden with fleas.  When Ryan apprised me of the situation, I asked him to bring her to me right away.
The poor little thing was undernourished and scratching non-stop.  Ryan picked up some flea soap, and I bathed her right away.  As soon as possible, she was off to the vet for a check-up, shots and some 'Revolution' to get rid of those pests once and for all.  Shortly after, Domino went back for her ladygardenectomy.
Domino has been mine ever since, and she has turned into a loving pet.  She still has a feisty PURRsonality, though she's not so wild anymore.  She rules the house with a velvet paw.
However, I soon discovered that Domino had a twitchy tail.  It would go off on her at random -- it seemed to have a mind of its own.  It always bothers her.  She tries to run away from it, but it follows her relentlessly.  She tries to catch it, but it always escapes.
One day when Domino's former human dropped by with Ryan, the mystery of the twitching tail was solved. In greeting her, he said "Hey, Domino -- remember this?" as he pulled her tail until it audibly snapped!!!  I screamed and asked him to stop, whereupon he told me she liked it -- that this was a 'game' they always played.
What a stupid human!  At least now we know the cause of Domino's plight, though there was nothing to be done about it, according to the vet.
You will be happy to know that Domino has never seen this guy since, though she is cursed with the legacy that he has left her.
This is a video of Dommy dealing with her damaged tail.  A tail of woe, indeed!
"Whoa!  Whoa!  Darn tail!"
Despite everything, Domino is the one who has triumphed.  She has a marvelous life, is well loved and has everything she wants and needs.
And this is why, I believe, she is so beautiful -- her inner joy just radiates (as I'm sure Milo can testify). 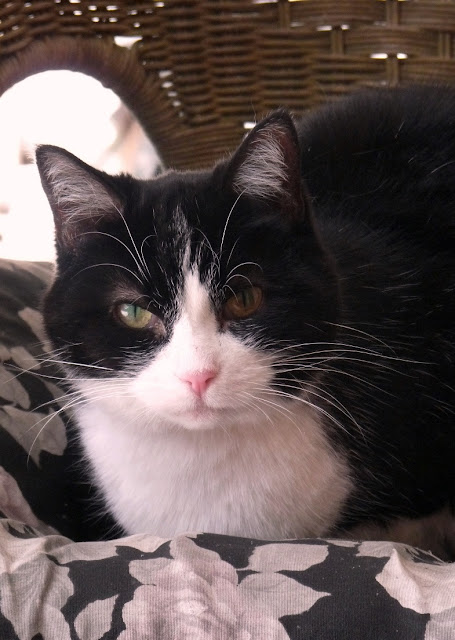 And so, this 'Tail of Woe' actually ends happily after all!
Posted by CCL Wendy at Tuesday, January 11, 2011

I am stunned! I know Dommy's story has a happy ending and she has a great life with you, but hearing her about her early days really fired me up. That guy sounds like a colossal irresponsible jerk abandoning kittens AND abusing them!!! I'm so happy that Ryan brought her to you, I cringe to think what would have happened to her otherwise.

Beautiful Domino, we just love you! (and your brothers too of course)

OMC, we didn't know (or the mom didn't remember) Domino's story. The mom would like to do something nasty and lasting to the stupid "friend". We're SO glad your son found her and brought her to you, Wendy. A pox on that dumb *ss kid who let her have kittens, who abandoned her, who damaged her tail. What a so-and-so. Oh, the human is working up to a good rant now, sorry!

Hi, this is our first time commenting on your bloggie. We are stunned (but sadly, not surprised) at what an idiot your son's roommate was. He was grossly irresponsible, neglectful, and cruel...and Domino was so lucky Ryan was there to keep her from dying...and also lucky that you took her in and gave her the love and comfort she deserves. Our Fuzzy was also neglected and possibly abused...and now he's the most affectionate and loving cat possible.

Sweet and beautiful Dommy, we are so sad that you had such a rough start in life!!! We are so thankful that you were finally blessed with such a wonderful home with the fantastic Ms Wendy.

We thank Ryan for watching over you as much as he could in the meantime.

You have been blessed Dommy and we know your humans have been greatly blessed.

Oh poor Domino. I am glad her story has such a good ending.

We knew Domino's story are are so thankful for your Son and you for saving such a beautiful kitty!

poor Domino! i says sumbuddy go yank hard on that guy's "tail" til it snaps too. that'd teach him.

Oh Domino! We are so happy that your life ended up GOOD. We hope that mean person never gets another animal, ever.
We all get tail-tugs, but NOTHING like that...Sylvester dances around until Mommy does a hand over hand on his tail, she calls it "reeling him in"! His hinders come up off the floor and he purrs like a maniac.

What an awful beginning for Domino! That jerk should never EVER be allowed to have pets!

We didn't know about sweet Domino's more than rough start, but we are SO happy she found a loving home with you, Wendy! Thanks to Ryan for bringing her to you. You brought up your kids perfectly!

It never ceases to amaze me how ignorant humans can be - and I bet Domino's former human fancies himself a cat lover! She is lucky she wound up in such a great home.

Poor Domino, she probably has damage that feels like the nerve twitching from time to time and can't understand why her tail does it to her. She also looked to young to have been taken from her mother. Thank goodness your sun was there to save her.

Oh wow!! We can't tell you how happy we are that Domino is now with you!!!

Dear Sweet Domino is so lucky to have ended up with you....someone should have taken that guy's "you know what" and twisted THAT til it SNAPPED....

I am sorry but people like that make me sick. I am so happy that Dommy is with you!

Am I the only one who couldn't see the video?

Sweet Domino, we just shudder thinking about your former life, but know...just as most of all of us here have discovered...there is life after abandonment and when you find the purrfect forever home, it's quite wonderful.

You got the family you deserved.

We are so glad you found your happy home and your tail ended happily!

We remember the story of her being locked in the garage, but never had any idea about her tail! mama is a lady and won't say what she wants to do to that guy. We're just glad she is someplace where she can be pampered!

I've read Dominoe's story before ~ and it breaks my heart to think that any cat, could be treated so hearlessly cruely. Thank goodness you saved her and give her the loved life she deserves. Please give her an extra smooch today from me. And SEVERAL from Milo. Milo adores her.

Wow. OMG. That makes us mad and sad but we are so happy she ended up with you Wendy and now has such a loving home. And a caring Mancat (Milo).

Domino hit the good home jackpot when she was rehomed to you! PURRhaps she apPURReciates it even more considering her sad FURst home!

She is so lucky to have you as her forever family. One day while visiting my boss' house, I watched her boyfriend kick the new kitten. I scooped him up and Licorice was mine for 17 wonderful years. I almost lost the job, but the cat was safe. I now have another abandoned kitty, Rusty. He is 16 and going strong. Give Domino a big hug from us,
Love,
Rusty and Deborah