FURIENDS ON FRIDAY: DANTE AND DOMINO

Dante and Domino have a very special relationship.  Not only are they brofur and sisfur, but they are also fast furiends.  There is an easiness between them that doesn't exist between Dylan and Domino (mainly because he's always trying to jump her!).

This is a relationship built on trust and loyalty.  Domino trusts that Dante knows his place -- and Dante defers to her majesty.

You will note that in every picture, except for the last where they are on equal footing, that Domino is in the dominant position and Dante in the submissive. 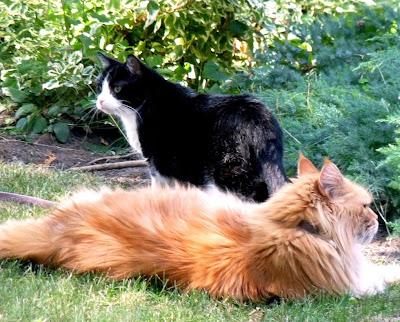 Here they are just hanging out in the garden together. 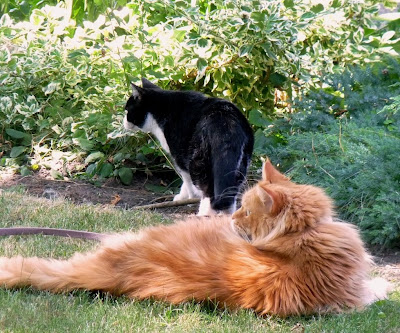 Four eyes are better than two when it comes to an introoder alert. 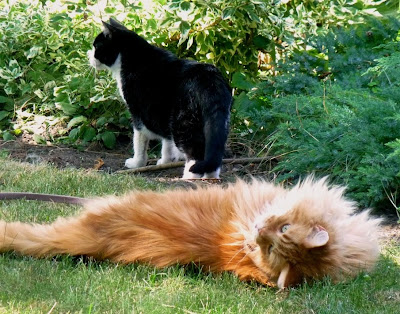 Domino can turn her back and be confident that Dante won't make any untoward moves.  If anything he's just become more submissive, if that's pawsible! 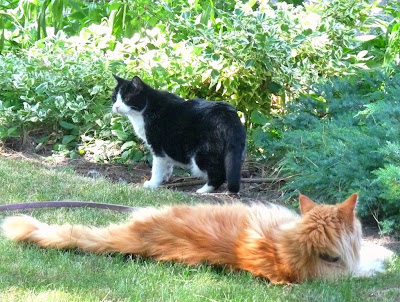 It's wonderful to have such a relaxed rapport ... 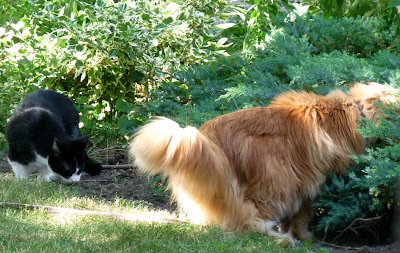 ... as well a furiend who'll help you out when you need it. 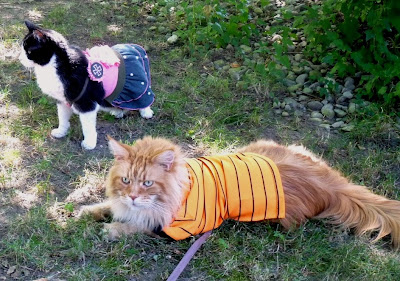 Domino holds Dante in such esteem that she even allowed him to join her last modelling photoshoot! 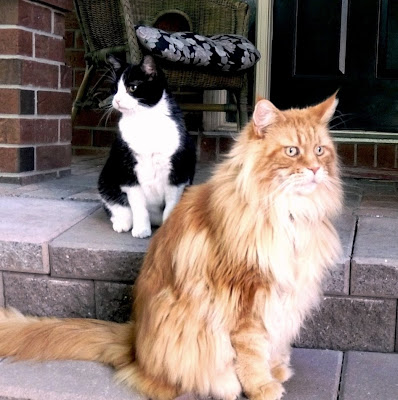 Back on the front steps Domino directs Dante.  "Yoo luk dis way an' i'll luk dat", she says.  Domino has always aspired to be a director, and she's very good at it, indeed. 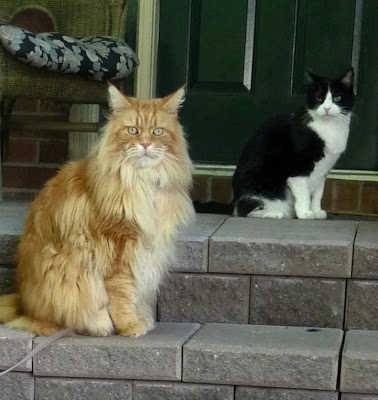 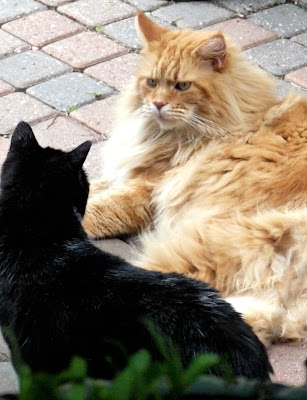 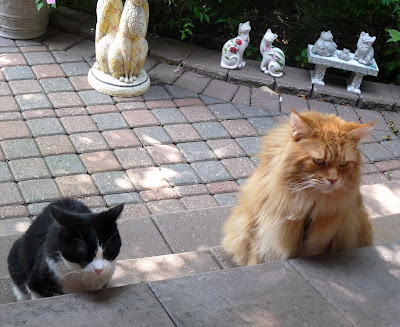 So they unite in a single cause -- begging mama to let them in.
The Moral:  When you work together, you more often WIN!
And they did.  Win, that is.
Posted by CCL Wendy at Friday, August 13, 2010

Working together is a good thing!

It's so funny how tiny ladycats can rule a house. Not that that happens here. *cough* ~Connor

Well of course the lady has to have the upper hand mostly - it's their right.
Luv Hannah and Lucy xx xx

These are great pictures of the two of them! And of course Domino is dominant - she is the ladycat after all!

That is so cool! Can't Dante teach Dylan how to act?

Dante, it does look like you are in charge but I guess someone has to be the big boss. Love the picture of you looking two different directions. Hope all of you have a great week end.

They remind me of Johnny and Scouty...where there's the one, there's the other, too! You would never imagine those two as littermates...SomeCat's Mama was a hussy, heh heh.

Aaaaaaaaaaaaah, so beautiful, as always.

Domino the dynamo!
I understand because I too am the tiny dynamo in my house. And I rule with an iron paw.

Both Domino and Dante looks so gorgeous in the lovely garden.

Loved seeing those two together, they are adorable and gorgeous!...They obviously have a very sweet relationship...Happy weekend friends...kisses...Calle, Halle, Sukki

They look very relaxed together. We are glad we don't have a ladycat telling us what to do though.

Awww ... it is sweet that they get along so nicely. Working together is good.

What a great pair you are! Here, we do not know what team work is. One of us is always trying to be boss, and the other one is not happy about it.

I love the way Domino's petiteness contrasts Dante's HUGEness! There was a Maine Coon in the shelter at our local mall and he made all the other adult kitties look itty bitty!

Nice to see they are buds!

Dante knows that with such a bootiful sister, he'll have to keep a close watch on her or she'll be carried away by the boycats.