MANCAT MONDAY: SPRING IS IN THE AIR (AND ELSEWHERE)

It may only be the first of March, but my mancats are definitely sensing the approach of Spring.  Aside from doing their sniffing duties around the perimeters of their territory, they also just sit quite still and sniff the air around them.

There are so many new scents and smells once the snow begins to melt.  Even I can smell the difference -- it's a multi-layered scent, much of which I can't identify.  I'm sure my mancats can detect every nosy nuance, though. 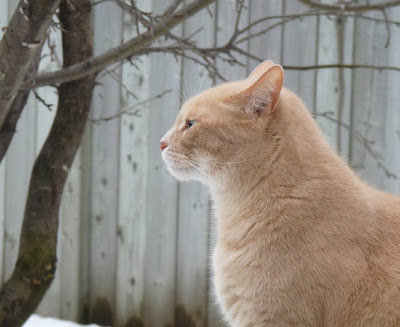 Here's Dylan ears back and nose thrust forward.  All senses are on the alert; smell front and foremost! 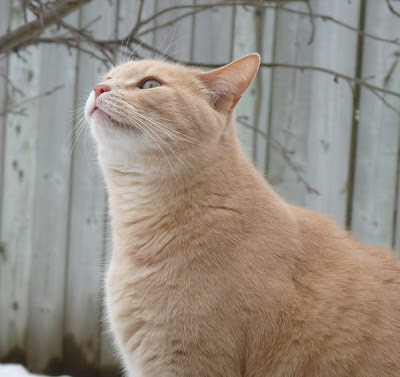 I love this shot where Dylan lifts his head, nose in the air, all the better to sniff with! 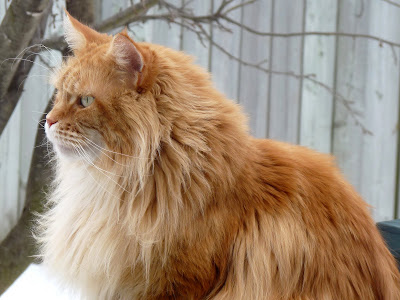 Dante, too, has a twitchy nose! 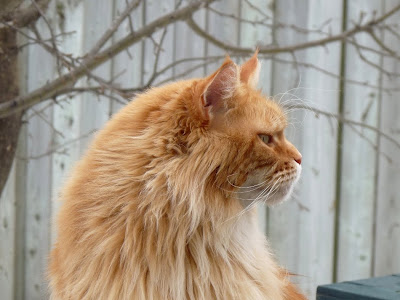 He turns his head in every direction to make sure he captures everything worthy of his delicate sensibilities. 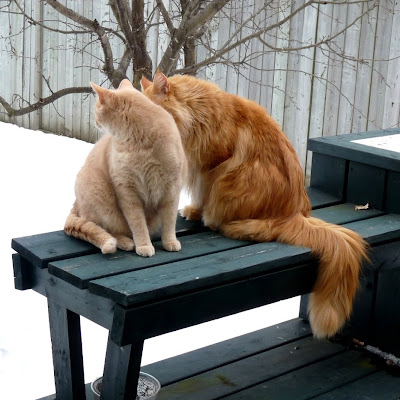 And his brother would be one of those things. 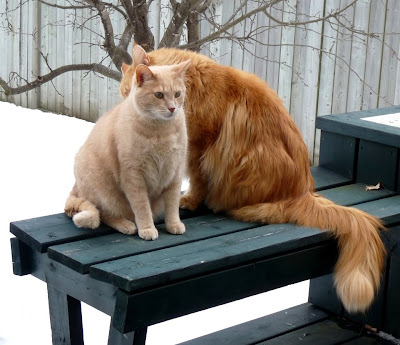 As long as Dylan doesn't get his back up, everything should be fine. 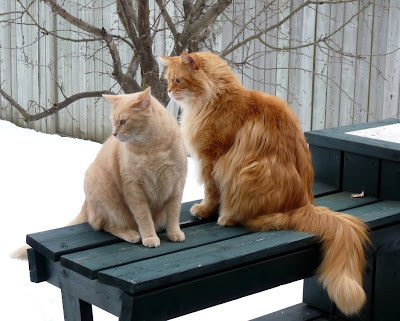 Dylan must smell like Spring as well!  He's been soaking up the scents from all around him and rubbing all over whatever he may come across. 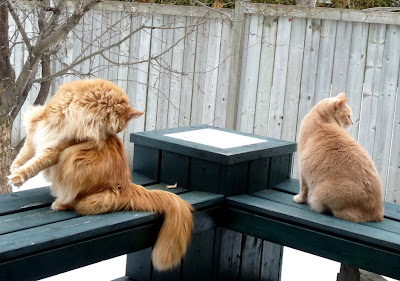 Then, there is the self-sniff!  Let's see what it smells like back here! 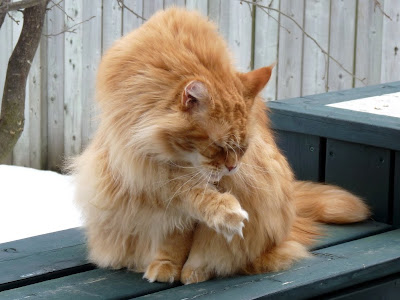 And Dante's paw has the aroma of damp grass and rotting leaves! Simply heavenly! 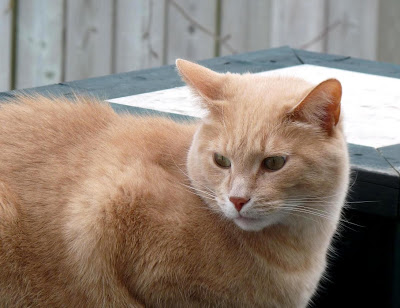 Meanwhile Dylan relaxes and steeps in his scents of self!
Both of my mancats are extremely SCENTSible whether they're sniffing from near or from far!   There's no nose quite like a mancat's nose.  Ya knows?
Posted by CCL Wendy at Monday, March 01, 2010

*Sigh* Have I mentioned how much I LOVE your photos?

Spring officially starts in 19 days, so we're getting there. Yippee!

Spring smells great over here too!!

Mancat March Monday!!! WOO HOO! Less than 3 weeks until sPURRing! As much as you guyz look good against the white background... I can't wait to see you against green again!!! I need GREEN!!!

We're so excited for Spring! Smells good doesn't it!?

I hope they are sniffing spring!

That is a great shot of Dylan. I've seen Angus do that a few times with his ears slightly back sniffing the air while he sits on the top step.
~Lisa Co9T

Gorgeous! I don't know if you're aware, but your mancats are beautiful. Just thought you'd like to know! *wink*

Mom said that Alfie is nose supremo in our howse. He sniffs stuff the whole time. When yoo look at him, yoo can see his little nosing sniffing ALL da time.

Must be nice to rest your rump on the cleared bench!! Enjoy the smells!!

Let's hope Spring is definitely in the air soon!

WE agree with Prailine - we hope we can smell some Spring here soon!

The smell of Spring is furry special!!

We love to smell that Spring is on the way too.

Lots of smelling in our sunny garden today too. Dushi (born april 26th) even found some flowers to sniff.

Dontcha wish they could bottle that smell??? Mmmmmmm!!

We just love the pictures of those 2 mancats taking in the outdoors. They sure did find some great scents.

You guys get mummy's heart racing every time she sees you! (Our heart races for Domino)

You boys are so gorgeous! Spring will be here soon!